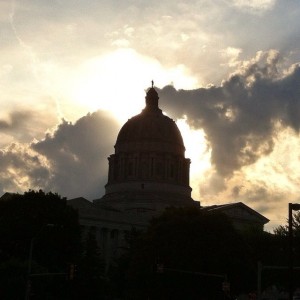 The Rightwing assault to pressure the 26 Republican legislators who voted against right-to-work to change their mind in the upcoming Sept. 16 veto session continues this week with a six-figure radio ad campaign being paid for by the front group, Americans for Prosperity (AFP).

This comes on the heels of a $196,000 television ad campaign launched two weeks ago primarily in the districts of those Republicans as well as a strong resolution supporting RTW and urging the Republicans to abandon their values by switching their votes.

The targets: 22 House and four Senate Republicans with the courage to support working families and not special interests by voting against the RTW law that passed both Houses but not without enough votes to override Gov. Jay Nixon’s veto.

AFP is behind a similar effort in Kentucky right now.

AFP’s funders are the infamous right-wing zealot billionaire Koch brothers who have spent several billions already since 2012 and publically pledged to spend $900 million plus for next year’s campaigns.

Their front groups include such innocent sounding names as Freedom Partners, American Encore, Donors Trust and Protect My Paycheck.

Defeating RTW by upholding Gov. Nixon’s veto of HB 116, is going to take a personal effort by every union member in Missouri, by calling and writing their legislators to urge them to vote “no” on a veto override.