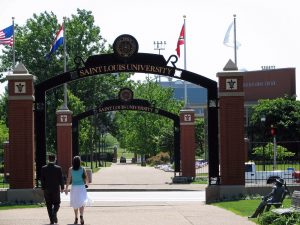 In a victory that demonstrates faculty solidarity throughout the Midwest, and marks an important victory for a faculty union movement in St. Louis and the rest of the country, Saint Louis University (SLU) part-time faculty have voted to join SEIU Local 1.

Votes for SLU’s all-mail ballot election were counted at the St. Louis office of the National Labor Relations Board. The the final vote count was 89 to 28, with a 76 percent vote in favor of forming a union.

INSTRUCTORS AND STUDENTS WILL BENEFIT

“I am thrilled about our successful vote to form an adjunct union at Saint Louis University,” said Ina Seethaler, an instructor in Women’s and Gender studies. “Now, we can work toward making changes that will benefit instructors and students.”

Jameson Ramirez, an instructor in Sociology and Anthropology, said: “This resounding victory is simply further proof of what the majority of us adjuncts already accept as fact: our future depends on our voices being heard and the formation of this union will bring positive change to our work conditions at SLU.”

The victory marks the fourth major victory for SEIU Faculty Forward in the St. Louis area in the past six months.

A little more than a month later, part-time faculty at Washington University in St. Louis ratified their contract with the administration, securing a 26 percent raise along with added wins in job security, compensation and access to facilities.

The victories in St. Louis are a big part of what has become a fast-growing union movement, as faculty come together to take on a crisis in higher education that has turned what was once a good middle-class profession into a job without stability or a voice in workplace decisions. Almost 13,000 faculty at dozens of schools from California to the District of Columbia have voted to join SEIU in the past three years.