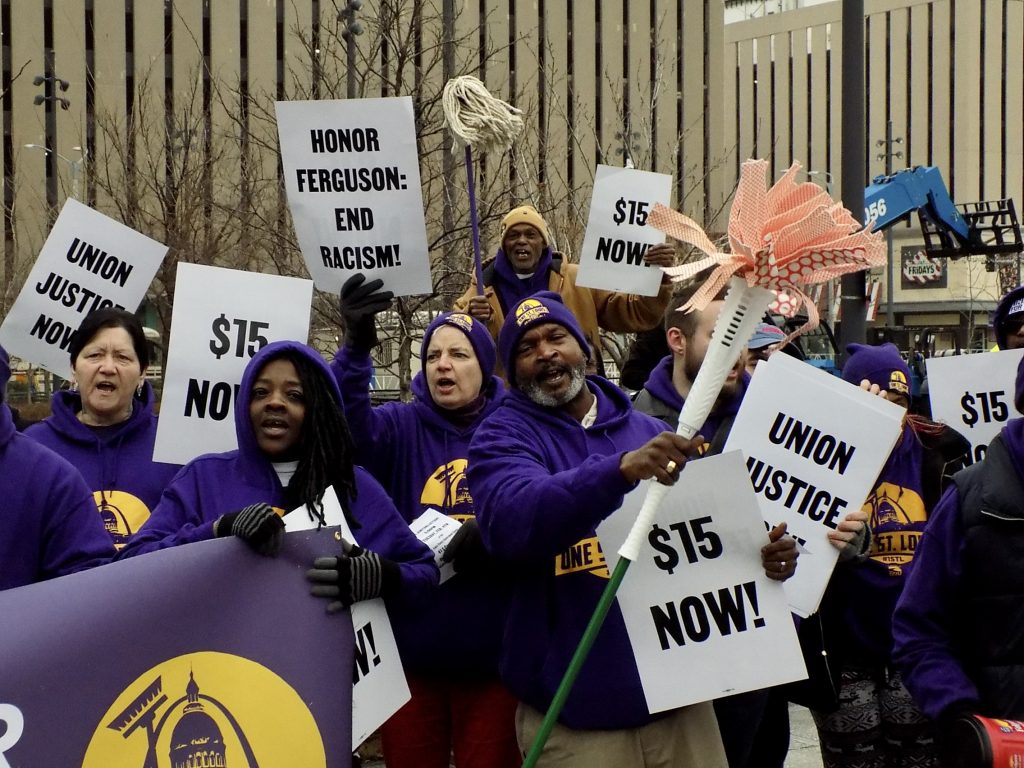 St. Louis – As negotiations for 2,100 SEIU Local 1 janitors enter the last scheduled day today, janitors, joined by St. Louis Building Trades Executive Secretary-Treasurer John Stiffler and prominent faith leaders Rabbi Susan Talve and Rev. Darryl Gray, announced that they’ve voted to authorize a strike and are ready to do whatever it takes to win the strong new contract they need to support their families.

Should negotiations today for higher wages and better benefits stall, Local 1 janitors could walk off the job in the coming days.

“I voted yes to strike because I’m struggling to support my daughter on $10 an hour, which isn’t enough to put food on the table,” said SEIU Local 1 janitor Keosha Gowan, a CleanTech janitor who cleans Express Scripts in North County. “$15 for our communities means that nobody would be left in the streets.”

The announcement comes after CleanTech janitors, joined by community allies and St. Louis Alderwoman Megan Green (15th Ward ), were arrested in civil disobedience outside US Bank Plaza on Monday.

Currently, janitors who clean prominent St. Louis-region buildings, like the St. Louis County facilities, US Bank Plaza, Peabody Plaza, Express Scripts, Bayer, Boeing, One Metropolitan Square, the Wells Fargo Building, BJC Healthcare and more, are struggling to raise their families on wages as low as $10 an hour. Median annual earnings for janitors are so low that many rely on public assistance just to make ends meet. These low wages hold our entire region back and exacerbate a growing racial income gap.

Janitors say they’re fighting for One St. Louis, a region where all working families can support themselves with at least a $15 wage and good union jobs. Their fight is in line with the Ferguson Commission’s recommendations to enact a $15 wage to give working people the opportunity to thrive.

Major institutions, like Treasurer Jones’ office, BJC Healthcare and Washington University in St. Louis put thousands of direct employees on the path to a $15 wage.

Both the St. Louis Board of Aldermen and St. Louis County Council have passed resolutions supporting janitors negotiating for a $15 wage.

On Thursday, Jan. 30, County Executive Sam Page announced steps the County is taking to wages for all non-seasonal, full-time employees and contracted employees to $13 an hour as soon as possible and move employees to a $15 minimum wage by 2022.

“St. Louis County employees remain the strongest asset we have as we work toward better government,” said County Executive Sam Page. “As part of my promise to make government work better for everyone, it is my duty to ensure that the people we rely on every day are compensated fairly for their work.”