Just days before Christmas, union sister Jessica Armistead and her husband Ryan found out they would be getting the gift of life thanks to Abbie Dunkle, a Highland, Ill., woman who learned about Ryan’s need for a kidney donor on Facebook.

For months Jessica, an Office & Professional Employees International Union (OPEIU) Local 13 member who works in the Health and Welfare Office at Machinists District 9, has been spreading the word about Ryan’s need for a kidney.

She started a Facebook page in March and has driven around with a magnet on her vehicle asking for donors since July. In August, someone spotted the magnet and shared it on social media, prompting a local television station to do a news story. Jessica also reached out to the Labor Tribune to help spread the couple’s hope.

“Abbie messaged us on Facebook after she was tested to be a donor,” Armistead said. “I’m still in shock. It hasn’t hit me yet. In addition to Abbie, I want to thank my union family for their support through all of this.”

A GIFT OF
‘A NORMAL LIFE’

Ryan, an Old Monroe police officer who has been undergoing hours of dialysis each week, announced the good news on their Facebook page Dec. 22.

“I’m getting my kidney transplant on Jan. 22!” he wrote. “Please everyone give Abbie Dunkle a big thank you for donating her kidney to me so me, Jessica and my family can go back to a normal life!” 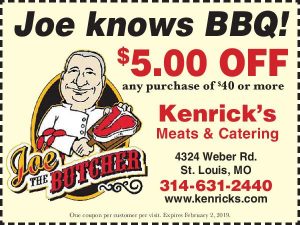 Ryan was diagnosed with an autoimmune disease called IgA nephropathy about two years ago. Like many other autoimmune diseases, there is no cure and medications can only slow its progress and help manage symptoms.

Also known as Berger’s disease, IgA nephropathy is a kidney disease that occurs when an antibody called immunoglobulin A (IgA) lodges in the kidneys, resulting in local inflammation that can hamper the kidneys’ ability to filter waste from the blood.

TO HELP THE FAMILY

Jessica has also set up a Go Fund Me page at gofundme.com/ryan-armistead-kidney-help to help the family with medical bills and finances.