Home Labor News From Our Region Teamsters ratify 5-year pact with A-B, with no give-backs 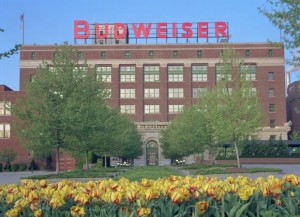 St. Louis – The new five-year contract for brewery worker Teamsters at the Anheuser-Busch brewery here and 11 other locations is a classic “lesson to be learned; it’s never easy but always possible if we stay together.”

That comment from St. Louis Teamsters Local 6 Secretary-Treasurer Bob Gartner highlighted the result of a unified effort by brewery workers across America last week as they overwhelmingly ratified a contract that will bring the average brewery worker a total of $24,000 in new wages and bonuses during the life of the pact.

“It’s a great contract for our members and for the Anheuser-Busch,” Gartner told the Labor Tribune, “A contract made possible by the solidarity of the union, both the rank-and-file and the leadership at all 12 brewery locations and our International Union.”

The union’s wage package includes $2.40 in wage boosts over the contract’s life: 40 cents an hour immediately retroactive to March 1, then 50 cents an hour in each of the next four years.

Additionally, there’s a unique bonus plan that will put $2,500 as a signing bonus in everyone’s paycheck immediately and beginning in 2015, an annual incentive bonus ranging from $400 to $3,500 based on the productivity and other issues at each individual brewery.

In St. Louis, Gartner said, the plan won 95 percent approval. “We didn’t have to go backwards, and in this day, that’s a major achievement.”

Noted Teamsters Joint Council 13 President Marvin Kropp: “Our leadership at our international, along with local unions representing our teamster brewery members, have once again negotiated the highest wage and benefit package in the brewery and soft drink workers industry. The new contract will cover over $2 billion in wages and benefits. That’s a real accomplishment we’re all very proud of.”

Gartner complimented the efforts of Local 6’s Business Representatives Harold Walker and Matt Pelizzaro who served with him on the negotiations.