Next month, UFCW Local 655 will ask our partners to come together for a vote. As 2019 winds to a close, I’m asking all of you, my partners, to show up and vote to approve an increase in your cost of membership with Local 655.

When I decided to announce our intention to hold this vote at our contract ratification meeting with Schnucks’ partners, plenty of folks told me I was crazy. We were presenting the best contract Local 655 bargained in 20 years. Why sour the mood of any partner by announcing that I intended to ask them to vote to increase the cost of membership? 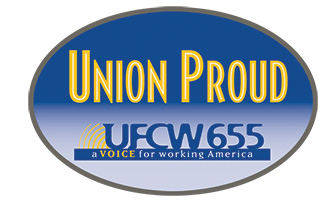 The reason was simple: I believe in transparency.

I have said since the day I was elected to be your President that it is the highest honor I have ever had, and I am humbled every day. I would never do anything to hide my intentions from you, the men and women of this Union that elected me to work on your behalf. I won’t hide from our decisions or disguise our intentions. I have always and will always speak plainly and clearly because I respect each of you and trust you will make an intelligent decision.

So, I’d like to take this opportunity to provide our partners with the information they need to make an informed decision. These facts ought to speak plainly enough for themselves.

2013
First, we haven’t had a permanent increase in the cost of membership at this Local since 2013, and that increase was handed down from UFCW International, not your Local union.

Every month, all UFCW locals around the country send money to the International Union in Washington D.C. based on our total number of partners. This per-partner rate is determined by a vote at International conventions. When a new rate is handed down, a Local is required to pay it. Most Locals choose to increase their membership cost — without a vote of the partners — to make up for this increase. That’s what we did in 2013.

Since 2013, the International has handed down three more per-partner rate increases. As your President, I have chosen not to pass those increases down by raising your cost of membership. Instead, we absorbed that cost ourselves. I did this, in part, because I did not want to raise costs for you if it could be avoided. In the eight years I have served as your President, the 2013 increase is the only time that your dues have increased.

Unions are a democracy. Without a mandate from the International, your dues cannot increase without your approval, and that’s how it should be.

A LOSS IN MEMBERSHIP
In December 2016, Local 655 boasted 10,327 partners. Since then, we’ve been fortunate enough to have success in organizing more workers to grow the size of this Union. Our talented organizers have added about 350 partners to this Union in the last three years.

But their hard work is an uphill battle, and when Shop ’n Save closed its doors barely a year ago, it represented a significant drop in membership in Local 655. Even if we account for the organizing victories, Local 655 has lost more than 1,000 partners since 2016. The bulk of these losses stem from the Shop ’n Save closure. While we’re happy that we were able to bargain a deal with Schnucks that preserved hundreds of jobs lost by the Shop ’n Save closure, it was a blow that we have not yet fully recovered from.

Right now, our organizers are working on multiple campaigns to grow our Union family, and I’m confident they will continue to be successful, but the loss of more than 1,000 partners in just a few short years also represents a loss in revenue that can’t be ignored.

HOW WE SPEND THE MONEY
In the years since 2013, many things have changed. But in the last two years alone, UFCW Local 655 has made some investments that have greatly benefitted our partners, but at a significant cost.

Defeating the phony “Right-to-Work”-for-less in 2018 was costly. We invested heavily in that fight, and while I do not regret a single dollar that we spent, the fact remains that those dollars add up. That same year we also invested in raising the minimum wage for all workers in Missouri, and we invested in Clean Missouri — an effort to create more transparency and reduce “pay-to-play” politics in the state.

But politics isn’t the only place where we have needed to increase our investments.

INVESTING IN OUR PARTNERS
We are currently engaged in careful and exhaustive bargaining with Dierbergs on a new retirement plan for our partners. As Dierbergs prepares to exit the Local 655 pension and negotiate with us on an entirely new program, I have made a commitment to all my partners to bargain the best possible retirement plan. This is not a cheap process.

In order to ensure the best possible deal for you, I’ve hired the best pension attorneys in the country to help us craft a new retirement program that will be robust and valuable to the men and women of Dierbergs who have earned the right to retire with dignity.

This means we must take the time to not only build a robust new retirement program, but we must also make sure we protect the current pension plan that so many of our Dierbergs partners are counting on for their own retirement. In order to craft a new retirement program as well as ensure that the current pension benefits remain intact, we have hired experts to work with us through this process.

These attorneys aren’t cheap, nor is the process of consulting experts on pension plans and retirements. This is a significant investment, but it’s worth every single penny for the hard-working families at Dierbergs.

We’ve also spent money on modernizing this local to ensure we can provide the best service possible. We’ve adopted new digital tools for our membership signup program to help us sign partners on a digital application that has significant value for this Local Union. These programs have significant value, but they also require real investment to get off the ground.

INVESTING IN HARD-WORKING FAMILIES
Finally, we’ve worked hard to step into a role in the St. Louis area as advocates for hard-working families.

We’ve invested in targeted digital campaigns right here in St. Louis aimed at improving our community. Many of you are by now familiar with our ad campaign in Wentzville, where we called attention to the mayor’s attempt to raise taxes on shoppers at union stores in order to build non-union competitors and line the pockets of billionaire Stan Kroenke, who moved our football team out of town, but apparently still wants to pad his bank account with our dollars. Kroenke is married to, Ann Walton Kroenke, daughter of Walmart co-founder James “Bud” Walton. In 2018, Kroenke was estimated to be worth $8.5 billion by Forbes Magazine.

We’ve similarly invested in campaigns in the city of St. Louis where we’ve targeted Fields Foods, a non-union employer paying substandard wages and benefits, while their owner collects millions of dollars in taxpayer money to build Fields’ stores.

Our larger effort is to encourage St. Louis shoppers to spend their hard-earned money at good employers, not at businesses built on the backs of working people that only benefit millionaires.

Those digital campaigns are important and valuable. In Wentzville, the citizens have risen up to put a halt to the Stan Kroenke project, and in the city of St. Louis, shoppers are turning away from Fields Foods. These campaigns have real value for our partners, but they require investment to be effective.

FINAL THOUGHTS
In short, we are investing in the future of Local 655. We’re seeking new solutions to problems that have existed for a long time, and we’re chasing innovation in an effort to be on the forefront of the Labor community.

And since 2013, we’ve done this without asking for a single extra dime of your hard-earned money. We’ve passed on opportunities to raise costs because I believe in exhausting every other avenue first.

Thanks to the good contracts we have bargained and the good contracts we will continue to bargain, this cost increase will not negatively impact partners. The increase in wages, the preservation of strong healthcare benefits, strong pensions, and the vast value of your Union contract means no one will see a net negative impact from the membership increase I am proposing.