Home Labor News From Our Region UFCW 655 working to organize Weekends Only; needs your help

If you’re in the neighborhood of the Weekends Only furniture store, 14205 Manchester, this weekend, stop in and give a word of encouragement to the employees who will vote Sunday, Feb. 28 on whether or not they want to have the protections offered by one of the largest, and strongest unions in Missouri – UFCW Local 655.

The employees need support because the company is running a tough anti-union campaign directed by a professional union-busting firm to intimidate and confuse employees against the union. 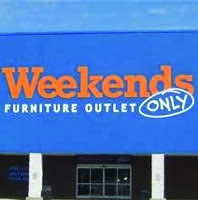 “What was once a family-run business is now part of a huge corporation and has lost its way, putting profits before its workers,” said one employee, who asked not to be identified before the vote.

“We reached out to Local 655 because we have real and serious issues that need to be addressed,” the employee stressed.

“We’re asking our members and all readers of the Labor Tribune to please visit the store, wearing your union gear, and let the workers know that union solidarity stands behind them,” said Local 655 President David Cook.