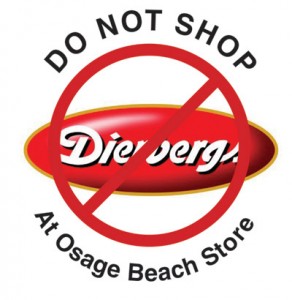 Osage Beach, MO – Dierbergs Markets has opened a non-union grocery store here and Region 5 of the United Food & Commercial Workers International Union wants every union family to help send a message to management that they won’t shop there as long as the store remains non-union.

And to make their point, Region 5:

• Is purchasing full-page ads in both the St. Louis Labor Tribune and the Kansas City Labor Beacon to alert families to this effort, one which the UFCW asks whether or not this is the first step towards Dierbergs considering the same thing in the St. Louis metro area where all its stores are represented by UFCW Local 655.

• Has begun handbilling at Dierbergs Lake store in the Lakeview Point Center.

• Will be posting giant billboards on highways from both St. Louis and Kansas City to alert all union families who visit the Lake of the Ozarks regularly during the summer to the company’s anti-worker move.

“Please DO NOT SHOP DIERBERGS at (their) Osage Beach Store,” urges the UFCW ad, which points out that the company has created lower standards for local workers at that store.

“It’s unfortunate that the UFCW is force to take this action with what has been a good union employer in the past,” said Local 655 President David Cook.

“Hopefully, when they realize that union families, who are a large percentage of the visitors to the Lake, will not shop at their store, they will reconsider their position of creating lower standards for local workers. After all, those workers have families to support and deserve reasonable wages and benefits.”

He added: “Participating with the unions is in everyone’s best interest.”

Local 655 does not have jurisdiction at Lake of the Ozarks. That falls within the jurisdiction of UFCW Local 2 out of Kansas City.