Following more than a year of tough negotiations, aided by the Federal Mediation and Conciliation Service, members of the United Food & Commercial Workers Local 655 ratified a three-year agreement with Dierbergs, Schnucks and Shop ’N Save, the region’s three largest grocery chains.

The contract covers roughly 9,000 members working at 104 stores and pharmacies in the area, allows for a 60-cent wage increase over the life of the contract and includes no overall reduction in benefits.

“It’s not the finest contract we’ve ever negotiated, but given the retail climate in our stores today, it was a reasonable agreement that had compromises on both sides. With the margin of acceptance, it’s clear our members felt it was reasonable for today’s circumstances as well,” said Local 655 President David Cook.

The contract includes no overall reduction in healthcare benefits, something that goes against the national trend of major benefit reductions.

• All part-timers, spouses and dependents will continue to participate in the union’s health care plan instead of being forced to move to the government exchanges as suggested by the companies, and

• The creation of a new benefit for those members who want to retire early – a Social Security supplement that will provide a larger pension payment until a member reaches Social Security retirement age.

Members will also have the option of choosing their own benefit plan from among three plans with varying levels of benefits and co-pays, providing a new degree of participation fairness: the higher benefit plans will cost more, the lower plans will cost less.

Cook said the contract, which expires on May 8, 2016, is one of the best in the country for retail workers.

“When you look at retail workers here in St. Louis as a whole, I think this is an anomaly,” Cook said. “There aren’t retail workers other than at unionized grocery stores that have benefits of this style as a rule.”

Cook said the most distasteful part of the contract was agreeing to allow the employers to be open for business on Easter and Thanksgiving, like their non-union competitors.

“I don’t shop on holidays,” Cook said. “I don’t think anyone should have to work on holidays. But it was a practical issue: 50 percent of the St. Louis market shops on holidays. If we’re not open, they’re going to go somewhere else, and they might not come back. That ultimately will have a negative impact on jobs and we wanted to avoid that potential loss.”

Local 655 members, however, will not be forced to work the holidays, but will have the option of volunteering to work at premium pay.

“This is truly a compromise agreement that, at its core, is designed to meet the needs our members told us were most important to them,” Cook said.

“These have been the most difficult negotiations since I’ve been with our union. Our union and industry faced the perfect storm: a slow economic recovery, an accelerating number of competitors and new laws impacting pension and health care all coming to an apex at the same time.”

The contract covers checkers, baggers, stockers and department managers, as well as workers in the bakery, produce, pharmacy, dairy and frozen foods departments.

Local 655 represents more than 10,500 members working in the 46 counties throughout the eastern half of Missouri. Its members are employed in food stores (its largest single division), shoe manufacturing, packinghouses, distribution centers and a number of miscellaneous plants.

Dierbergs, Schnucks, and Shop ’N Save stores in southern Illinois are not covered by the contract; workers in that area are represented by UFCW Local 881 based in Chicago.

These are tough times for the St. Louis area’s union grocery chains, with non-union competitors such as Walmart, Trader Joe’s, Aldi’s, Target, and Whole Foods taking a growing share of the market. “That’s motivation enough for us to cut costs to stay competitive, but at the same time protect our members,” Cook stressed.

“We feel the changes made in the contract will allow our stores to continue to compete with the growing number of companies adding food to their mix of products in order to steal market share of the food business,” he said.

“Unlike with these big box stores, Schnucks, Dierbergs and Shop ’N Save provide the finest quality foods at extremely competitive prices while ensuring their employees can earn a decent living and provide health care for their families.”

Following are the highlights of UFCW Local 655’s new three-year contract with Dierbergs, Schnucks and Shop ’n Save. 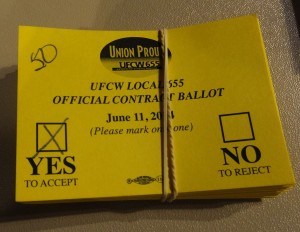 Members will receive a 60-cent an hour raise phased in over the life of the contract as follows:

• No overall reduction in benefits.

• All part-timers, spouses and dependents will continue to participate in the Union’s plan instead of being forced to move to the government exchanges as suggested by the companies.

• As a new benefit, members will have the option of choosing their own benefit plan from among three plans that will have varying levels of benefits and co-pays.

• Implements a new Social Security Equalization Program (SSEP) option that will supplement and enhance an early retiree’s pension payout until they are eligible for Social Security. This option creates a new opportunity for members to take early retirement.