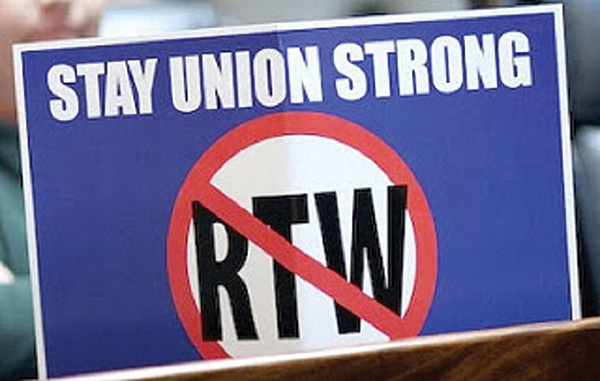 (EDITOR’S NOTE: Republicans in the U.S. Congress are pushing to pass a national anti-union “right-to-work”(RTW) law. As part of their effort, the National Right to Work Committee is financing a direct mail campaign to voters which includes “petitions” recipients are asked to sign and send to their local congressman attempting to show the recipient is “for” a national RTW law. Ironworker 396 retiree Albert Bruton Jr., 81, received such a letter and his outrage and common sense are reflected in his responses both to the effort’s sponsor, Senator Rand Paul, and his local U.S. representatives. It’s an example we would encourage all readers to emulate. Brother Bruton’s letters have been edited here for brevity.)

TO SENATOR RAN PAUL
Dear Senator Paul:
Since when did Congress take this type of legislation away from the states, which have the ONLY right (to consider) this type of legislation?
Check the pay differences in states that have NO rights (to a say) in their pay? The difference would show $6,000- $10,000 less for non-union workers in the “right-to-work” states than union workers in the same state.
So forget about Congress voting on the “right-to-work” law. Otherwise those voting for this law can look for a new Job. I know I will Vote against anyone who willing vote for this type of law. I have not signed your petitions and will never sign a ridiculous petition like this against mankind!
You say that the unions FORCED workers to pay dues. The unions are run by the membership and not by the “union bosses” like you say! The (everyone pays) dues requirement (voted by the members) pays for representation in the work place.
Which is more than I can say about the United States Congress because it is the People who should have a say and NOT the Bureaucrats!
Do you belong to a club or organization where you pay to belong or else no admittance? What is the difference between them or a union?
If you would check the history of Labor, you will find that employers of the past demanded workers work a lot of hours just to get enough money to sometimes pay for their bills and buy groceries. These same workers were also forced to work in unsafe conditions or else lose their job.
I have worked alongside non-union workers. They worked for $3-$5 less (an hour) than union workers, wore NO hard hats or safety equipment and were told not to say anything about these things… I guess if you had your way, a lot of non-union workers will lose their jobs if they say or do something wrong their employer didn’t like. No arbitration (for them to win fairness)!
Unions were formed to protect the workers and to get a fair wage to pay bills and buy groceries, without having to make a choice between a roof over their head or something to eat!
Now union workers have health insurance, a pension and a reason to live, not just to survive. The unions also make sure of SAFE working conditions and a school to learn their trade.
Sure, there are some unions that overstep some of their boundaries. The unions are not perfect; they are like you and me. Could an education about the past help us foresee the future?
Union workers work with their employers for a better workplace and a fair wage, helping the company to thrive for everybody concerned! Non-union workers work only for a paycheck and the Hell with conditions!
Albert Bruton
Iron Workers 396 (retired)
Concerned Citizen, Veteran, Christian and VOTER

ABOUT THE “RIGHT-TO-WORK” LAW
To: Senator Roy Blunt
Senator Josh Hawley
Representative Blaine Luetkemeyer
Gentlemen:
I wish to bring up what Senator Rand Paul of the “right-to-work” committee will be trying to push through Congress. He wants the federal government to tell the states what they must do about work. This has, and always will be, up to the individual states to say what that state wants or doesn’t want in law, as long as those states don’t go against the federal guidelines!
It seems that Senator Paul is one of the Bureaucrats who wants to run the United States as he sees fit and to HELL with what the U.S. citizens say! We the People are supposed to tell our representatives how to run our democratic government, not a Dictator! That is why we VOTED those people into office to represent the U.S. citizens not just themselves.
Too many Congressmen think they, and they alone, have the authority to do as they please. It’s about times someone speaks for The People! The state of Missouri People VOTED against the “right-to-work,” twice, and put it out of practice. (EDITOR’S NOTE: The Missouri legislature is trying to ignore the 67 percent of Missouri voters who said “NO” to a RTW law here just last year by trying to yet another such initiative in this session.)
I believe that once a law is voted down, it cannot be put on a ballot for at least 20 years! Everyone has the right to seek employment and work. If they seek work that has a union, then they should pay dues. Why? Because those people will earn at least 10 percent more than a non-union worker would receive, get better benefits and a safer workplace (guaranteed by a union contract approved by the workers themselves). The “right-to-work” (law) cannot guarantee the same benefits or a safe work place.
You say the union “forces” a worker to pay so he can get a better wage, benefits and safer work place. If you join a club or organization, don’t they demand a membership fee (for their services)? But I guess that is not the same by Senator Paul’s definition.
If and when this becomes a bill before Congress, PLEASE vote against it and tell the others in Congress to vote against this bill also.
Thank you.
Albert Bruton
Iron Workers 396 (retired)
Concerned Citizen, Veteran, Christian and VOTER

MEMO TO HIS UNION
To: Bill Brennell, President
Ironworker Local 396
Dear Bill,
I received a letter in the mail from Senator Rand Paul. It seems the bureaucrats are at it again! They wanted me to sign a petition on a “right-to-work” bill (Paul) wants to put before Congress. I wrote “VOID WILL NOT SIGN” across the front of all five petitions.
I (also) sent a letter to Senator Rand Paul – he is on the Right to Work Committee – telling him what the difference is between a union worker and a non-union worker.
The letter will probably be ignored by him and his committee because they wish to ignore the facts.
I am an old time Ironworker since March 1957, and came from a family of Ironworkers. I carried an honorary membership with Local 396.
Sincerely,
Albert Bruton
Iron Workers 396 (retired)
Concerned Citizen, Veteran, Christian and VOTER

A NOTE FROM PRESIDENT BRENNELL
“I received these letters and information from one of our retired members who will turn 82 this October. I constantly tell our members that we stand on the shoulders of the ones that came before us and I think this is a fine example of just that! This guy hasn’t forgot where he came from or where he made his livelihood.
“I thought this deserved to be shared with other hard-working people in our area.”
Bill Brennell
President/Business Agent
Iron Workers Local 396