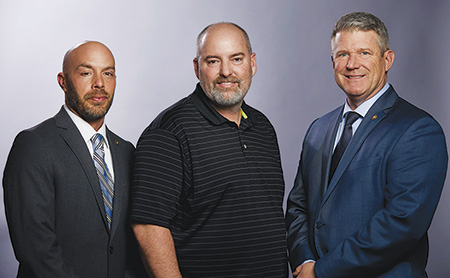 Jefferson City – Three members of Missouri Labor unions are fighting to maintain a voice for working people in the Missouri House and Senate in this fall’s election. They are (from left) Terry Burgess, a member Laborers’ Local 110 running for House of Representatives District 113; Adrian Plank, a member of Carpenters Local 1925 running for House District 47; and Rep. Doug Beck (D-Affton), a member of Plumbers and Pipefitters Local 562 running for Missouri State Senate District 1. – photo courtesy of Terry Burgess/Laborers’ Local 110