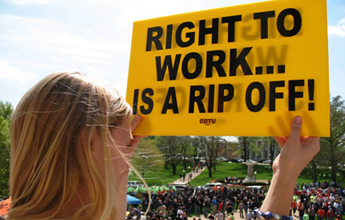 Collinsville – Generals tend to prefer big battles where they can maneuver and control the battlefield, but wars are often won in small, guerilla fights in obscure places with strange-sounding names.

While Missouri fights the right-to-work battle on the legislative floor in dramatic party-line votes, Illinois is deciding on right-to-work in piece-meal fashion, at obscure town council and county board meetings across the state.

Anti-union Gov. Bruce Rauner can’t hope to win a right-to-work vote in the Legislature, so he is trying to entice hard-put local governments to sign onto his “turnaround” strategy calling for local right-to-work zones, even offering incentives to those that do.

And some places that are already reliably Republican and non-union have had no problem doing so, even though Attorney General Lisa Madigan has ruled that local right-to-work is illegal.

Illinois Speaker of the House Michael Madigan called Rauner’s bluff last week by calling a vote on right-to-work bill based on Rauner’s talking points. The measure failed by a vote of 0-72 against. (See related story.)

At the local level, in localities where unions are active, Rauner’s strategy has already failed badly on numerous occasions, even in places still dominated by Republican board members. Southern Illinois has been especially tough for Rauner, who lately has been defeated in right-leaning Edwardsville and Jefferson County.

The Illinois AFL-CIO and AFSCME organizations have been taking the fight to the towns by compiling and spreading information about which councils and boards will be next to consider “turnaround resolution” votes. Union members have been turning up, sometimes in the hundreds, to provide crucial support for protecting the right of working people to be represented by unions.

On April 26, an estimated 500 union supporters attended the Jefferson County Board meeting in Mount Vernon where the board was to consider a resolution supporting Rauner’s plan. The board had to move the meeting out of chambers and into the lobby, which was still barely large enough.

Unionists were a little concerned because eight sheriff’s deputies also showed up for the meeting, but then Sheriff Travis Allen stood and spoke up for unions, including the one that represents the deputies.

“You could kind of feel the crowd relax a little bit,” Thurston noted.

Even though Republicans control the board 9-4, not one member was willing to make a motion for resolution to be considered, so the issue died a quick death.

Given the vagaries of local government, there isn’t always time to build a crowd. Dale Stewart, executive secretary-treasurer of the Southwestern Illinois Building & Construction Trades Council, got a call on May 6 telling him the Edwardsville City Council was going to vote on a version of turnaround at its meeting that night.

Stewart hightailed it to the meeting and explained once more why right-to-work can only damage a local economy.

The board members include three women – Janet Stack, Barb Stamer and Jeanette Mallon – all of whom spoke in opposition to the resolution.

“They stood real hard and firm for labor,” Stewart said.

“Sometimes these are short notices for everybody,” Stewart said, “but you’ve still got to go reach out.”

A small but important skirmish erupted May 5 in Litchfield, in Montgomery County, north of St. Louis. Litchfield had quickly and quietly endorsed Rauner’s program, but when opposition came up, the City Council put the vote back on the agenda for reconsideration.

About 120 labor supporters showed up to make their feelings known. Mayor Steve Dougherty welcomed them, but denied them a chance to speak, citing a council policy that speakers must sign up a day before the meeting.

Dean Webb, president of the Greater Madison County Federation of Labor, spoke up anyway; saying at least some of the unionists should be heard.

AFSCME Regional Director Eddie Caumiant joined in, saying it was an open meetings violation not to accommodate all of those at the meeting.

In a tense moment, the town’s police chief supported the mayor and threatened to make them all leave the meeting.

So the workers were seen but not heard, and the resolution was rescinded anyway on a 5-3 vote – another downstate defeat for Rauner.

According to AFSCME, at least 27 local governments have either tabled or defeated the resolution.

In Dixon – hometown of Ronald Reagan – the village board passed a resolution, but it stated that, “the real agenda of the right-to-work concept is to undercut wages and benefits.” 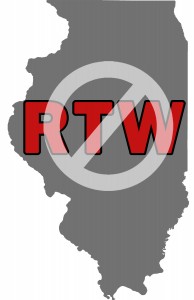 Thurston, president of the Southwestern Illinois Central Labor Council, has asked the St. Clair County Board to consider an alternative pro-worker resolution at its meeting on May 26 in Belleville. Its 17 “whereas” statements assert the importance of a strong middle class to the nation, and the necessity for fair and adequate wages to sustain that middle class

It also notes that federal courts have ruled that right-to-work is an issue for state, not local, governments.

“Hopefully we’ll pass it in St. Clair County,” Thurston said. “Then we’ll start to work on the cities, and the other counties.

“We have to show these politicians who aren’t our friends that we are serious. This is our livelihood and we’re not going to stand still for it.”