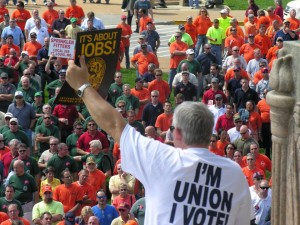 Union members’ share of the private sector workforce was 6.7 percent last year, a ratio unseen since the pre-labor law era of the Roaring 20s.

WHY THE NUMBERS MATTER

The declining share of unionized private sector workers is important because when one private workplace is unionized – and its workers get better wages and benefits – its competitors often must match it.

And there’s a big wage gap: The median weekly wage for union workers last year was precisely $200 more than that for non-union workers, BLS said: $950 vs. $750.  The median is the point where half the workforce is above it and half below it.

There’s still a wage gap between union men and union women, but it’s narrowing – and it’s a lot less than for non-union men and women.

WHERE THE MEMBERS ARE

Once again, union members were concentrated in the Northeast, the Midwest and the Pacific Coast.  New York (24.4 percent), Alaska (23.1 percent), and Hawaii (22.1 percent) led in union density.

In those big states, New York and Illinois jumped both union numbers and density.  New York added 145,000 unionists and Illinois added 50,000.  Density rose by 1.2 percentage points in both states.

California and Pennsylvania lost both numbers and density, New Jersey stayed the same, and Michigan and Ohio gained slightly.

There was no public-private breakdown by state.

The anti-union South had the lowest union density, except that Right Wing-dominated Utah replaced Texas on the list of least-unionized states.  North Carolina (3 percent) was last, trailed by Arkansas, Mississippi, South Carolina and Utah, in that order.

AFL-CIO President Richard Trumka had no immediate comment on the numbers, but Larry Mishel, director of the Economic Policy Institute, did.

Mishel noted that private-sector union membership rose in construction and manufacturing, two of the more-unionized sectors of the workforce, accounting for the entire increase in union numbers.

But the share of public sector workers whom contracts cover dropped, he pointed out.  That includes the 1.5 million “free riders” who get benefits of contracts but who don’t pay union dues, just fair share fees.

A current U.S. Supreme Court case, Harris vs. Quinn, challenges even those fair share fees from the free riders as a violation of the free riders’ free speech rights.

“More than 35 percent of net new jobs” in factories and construction “were covered by collective bargaining agreements,” Mishel said. “Improvements in the private sector have been offset, however, by erosion in the public sector.”

The starkest change was in Wisconsin, where union coverage in the public sector fell from 53.4 percent in 2011 to just 37.6 percent in 2013.