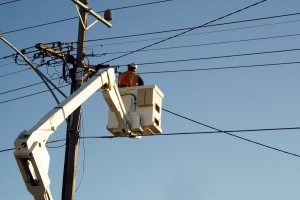 Jefferson City – Thanks to the last minute efforts of Senator Tim Green (D-North County), a long sought after change in Missouri law to give utility and cable workers the same on-the-job protection afforded police and corrections officers, emergency personnel and highway construction zone workers is on the verge of becoming a reality.

A Senate amendment to House Bill 1647, a public safety bill, was finalized and sent to Governor Jay Nixon on May 30 that includes the new safety language for utility workers inserted by Senator Green. The governor has until August 28 to sign or veto the bill.

“A series of articles in the Labor Tribune earlier this year made it abundantly clear that this is a critically needed change in the law, one we’ve been fighting to pass for several years,” said Mike Walter, president of IBEW Local 1439 whose members are among the utility workers who will be protected by the new language in the new law.

“We are strongly urging the governor to sign this vitally needed bill. Our members are providing a valuable service to the public who need to understand that we’re just doing our job, and if someone puts a member’s life in jeopardy, they need to know there will be severe penalties just as there are for assaulting a police officer or fire fighter,” Walter said. He is also president of the Missouri State Utility Workers Conference, a statewide group of utility unions that has been working tirelessly to pass this bill for the past two years.

“Ameren Missouri is please to support legislation that aligns with our focus on safety, like this utility worker safety bill, that can potentially remove distractions from our skilled craft employees and foster a safer work environment. We are impressed with the leadership of our unions on this issue and Ameren Missouri was pleased to work along side our unions,” said (name and title to come).

“We especially appreciate the efforts of Senator Green for getting this protection included in the public safety bill, and then getting it passed. I know he’s leaving the Senate, termed out. He will be missed. Few in labor understand the legislative process like he does,” Walter added. Senator Green is a member of IBEW Local 1 and has served in the state House of Representatives for 24 years, and the last eight years as a senator.

The Labor Tribune stories highlighted the dangers utility workers face as they attempt to do their jobs, some having to turn off vital utilities, others working high above the ground replacing or repairing high tension wires.

In both cases, the workers are constantly exposed to dangers from irate customers fighting having their utilities cut off or, as was one case featured by the Labor Tribune, three men working high above the ground in two buckets and several on the ground were wounded by a shotgun wielding nut job for no apparent reason other than he was probably mad at the utilities for some unknown grievance. He later committed suicide when police caught up with him.

“I felt helpless up there, there’s nothing you can do to protect yourself. If they passed this new change to the law, at least it would tell us that someone out there is looking out for us,” Jeromey Sitton, who was up in a bucket and shot in the leg, thigh and stomach, told the Labor Tribune. He has since recovered.

And this was not an isolated incident: Many utility workers have been shot at, threatened with bodily harm, had dogs sicked on them, and more.

“There’s no good reason for the governor to veto this safety bill,” Walter said. “We are hopeful that he will sign it an ensure that thousands of utility workers across the state will have a solid measure of security when they’re on the job.”

Under that new law, violators face a host of penalties up to and including a Class A felony. Under current law, someone threatening a utility worker faced only a misdemeanor charge.

Here’s a sampling of what utility workers across the state face every day on the job that House Bill 1647 hopes to make a thing of the past with more severe penalties for threatening utility workers.

These examples are taken directly from Field Incident Reports from Ameren and Laclede Gas.

• “The man told me to get off his property or he was going to shoot me. We cut the service at the pole with police assistance.”

• “I’ll rip your throat out if you disconnect me.”

• “While trying to complete the job (of turning off the gas at a business) the owner and two employees came out the back door. The owner charged me and attempted to tackle me to the ground. I was able to control him on the ground until one of the employees began kicking and punching me. I got up to control him and while doing so the owner got a long 2×4 and struck me several times. Two of the strikes were directly down the center of my head…” Ultimately the owner was charged with a misdemeanor and received a small fine.

• “I heard him yelling that he was going to shoot someone today. At that time, I left the porch headed for my truck and his wife was yelling for him to stop. At that point he came out with a shotgun. I told him I was leaving and there was no need to do anything that he would regret…. Three police cars went to his house and arrested him and took the gun from the house….”