Home Labor News From Our Region What Is Social Security? 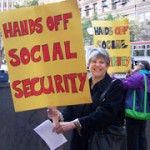 Social Security embodies the principle that we are all in it together and reflects the basic American values of hard work, personal responsibility, caring for family and neighbors, prudent financial management and respect for dignity and independence. Social Security recipients earn their benefits by paying into the system throughout their time at work.

Social Security provides a guaranteed income each year to more than 55 million American workers and their families who have lost income due to retirement, disability or death. That’s nearly one family out of four.

Between 1960 and 2008, Social Security helped cut the poverty rate among seniors by more than two-thirds, from 35 percent to just under 10 percent.

SOCIAL SECURITY IS NOT IN CRISIS

The Social Security surplus is invested in Treasury bonds backed by the federal government. These bonds are as solid as all other Treasury bonds.

SOCIAL SECURITY DOES NOT CONTRIBUTE TO THE DEFICIT

Social Security does not contribute to the deficit and should not be lumped in as part of the long-term deficit problem. The Social Security trust fund is a separate account with its own dedicated source of funding—employer and employee payroll tax contributions.  It cannot pay benefits unless it has funds to do so–that’s the law. Social Security cannot borrow or spend dollars it doesn’t have.  The real causes of the projected deficits are the Bush-era tax cuts, two wars that were not paid for, the recent recession and health care costs.

Social Security should not be cut and proposals to do so have been included in various congressional plans to reduce the federal budget deficit. All three of the following changes to Social Security are benefit cuts that would hurt working families and retirees.

The automatic annual cost of living adjustment (COLA) for Social Security protects the value of benefits from shrinking due to inflation. Proposals to adopt a supposedly “more accurate” formula to calculate the COLA, such as the “chained Consumer Price Index,” are really disguised attempts to lower COLA payments and reduce Social Security for current and future Social Security beneficiaries. The chained CPI makes the inflation rate look lower than the index now used by Social Security. As a result, the annual COLA payment would be about 3 percent less after 10 years, and the benefit reduction would increase over time, reaching more than 6 percent after 20 years. These larger cuts would have a greater impact on those receiving benefits the longest, including senior women who rely more on Social Security than men and those disabled at a young age who go on to live long lives. Because the chained CPI does not take into account the fact that seniors spend more on health care, it is an inaccurate way to measure inflation for them.

Raising the age when workers can claim full Social Security benefits is an across-the-board benefit cut. Increasing the age from 67—the full retirement age for workers born in and after 1960—to 69 would reduce lifetime benefits by about 13 percent. For each year the full retirement age is increased, Social Security benefits are reduced by roughly 7 percent.

Benefit formula changes are often described as affecting only workers with higher than average earnings. One proposal, dubbed “Bowles-Simpson” after its proponents, would cut Social Security benefits for workers with average lifetime earnings as low as $27,000, with bigger reductions for workers with higher average earnings. Other proposals, such as “progressive price indexing,” would reduce benefits for those with average lifetime earnings of $22,300. These kinds of changes reach deep into the middle class. Such changes weaken the connection between the Social Security benefits and the payroll contributions workers make throughout their careers.

The Social Security trust fund is fundamentally sound with a surplus that, according to both the Social Security Trustees and the Congressional Budget Office, will continue for years to come. Its modest revenue shortfall, about 0.96 percent of GDP over the next 75 years, should be addressed. Doing so can be done without cutting benefits. The shortfall is comparable to the cost of extending the Bush tax cuts for the wealthiest 2 percent. Most of the shortfall could be closed by eliminating the annual cap on wages subject to the payroll tax, currently set at $113,700 per year.