A collection of original paintings, posters and displays from local union members and nationally-known artists you won’t want to miss 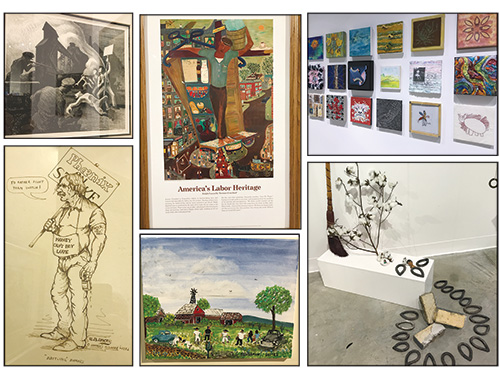 A dramatic and original presentation of the skills, concerns and issues facing workers, Bread & Roses Missouri’s “Art Is Labor,” is on display now until Jan. 17, 2020 at the Arcade Contemporary Art Projects at Webster University’s Gateway Campus, 812 Olive Street in downtown St. Louis.

A preview showing launching the exhibit in celebration of the fifth anniversary of Bread & Roses was held Dec. 7 along with the performance of a sketch from Bread & Roses’ upcoming 2020 Workers Opera titled “Vote Connection,” performed to rousing applause from the workers, union members and social justice advocates and supporters in attendance.

LOCAL AND NATIONALLY-KNOWN WORKS OF ART
The exhibit speaks of the workers of our time and recognizes workers as artists, and artists as workers, notes Bread & Roses Missouri President Shannon Duffy, business representative of the St. Louis United Media Guild.

The exhibit includes artwork from 16 artists including two local union members and several notable nationally-recognized Labor artists like Ralph Fasanella (“Going to Work” – 1982), Thomas Hart Benton (“Strike” – 1933), Elizabeth Caitlett (“Organize the UnOrganized” – 1946) and Ben Shahn (“For All These Rights” poster). These nationally recognized works are loan from the Bruce and Barbara Feldacker Labor Art Collection and are normally on display at the St. Louis Mercantile Library Art Museum.

‘A MESSAGE OF SOLIDARITY’
One striking display, a 6’ x 5’ quilt made out of union t-shirts from 22 different unions/events, is on loan from Jobs with Justice (JwJ) Policy Director Richard Von Glahn, who collected the shirts over time through his involvement in numerous fights for workers’ rights and social justice. Rather than the shirts sit in a box, his mother-in-law, Bernice Fischman, made them into a quilt as a gift for him.

“It’s meant to display a message of solidarity that it is the heart of JwJ and indeed the larger Labor Movement,” Von Glahn said. 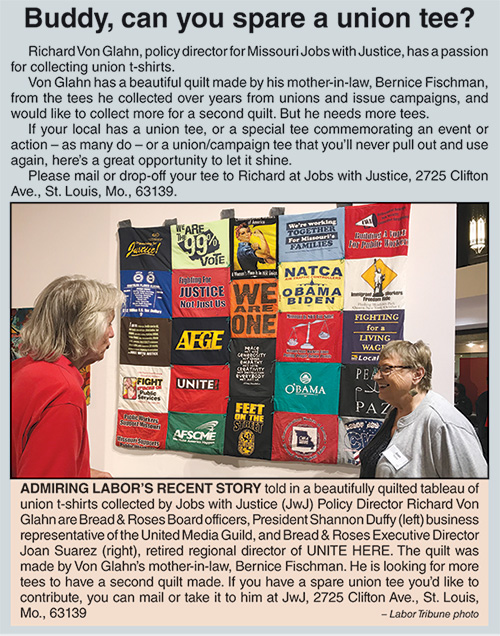