Chanting “We demand to move” and “Federal lives matter,” members of the American Federation of Government Employees (AFGE) Locals 1336 (Social Security), 3354 (Department of Agriculture) and 2192 and 96 (Veterans Affairs) rallied outside the Goodfellow Federal Center at 4300 Goodfellow Blvd. in St. Louis June 6 to demand immediate action regarding hazardous materials found in the complex – a situation the government knew about for years but failed to properly address or fully inform employees of the risks to their health.

‘THEY DIDN’T TELL US’ 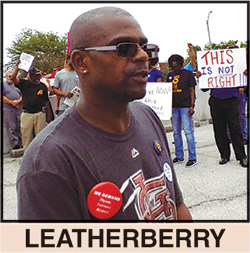 Darryl Leatherberry, a Marine Corps veteran who works in Veterans Affairs, said the VA sent about 75 employees to be tested for lead contamination but failed to test for exposure to the 82 other contaminants found in the complex.

“They still didn’t tell us about all the contaminants; we were only told about lead,” Leatherberry said. “That kind of had me upset. For being an employee here for as long as I’ve been here, 13 years, I feel like I should have been notified and told about all of these different contaminants that could possibly cause me health issues.

“This is my career. This is what I love doing, helping vets. I’m a vet. But I should be able to come and do that in a safe environment.”

AFGE is calling for the “immediate transfer” of some 2,400 federal employees at the multiagency facility, which houses offices of the Social Security Administration, Department of Veterans Affairs (VA), the Agriculture Department (USDA) and the General Services Administration (GSA).

AFGE also is calling for a Congressional investigation into whistleblower retaliation.

The situation at the Goodfellow center stems from an Occupational Safety and Health Administration (OSHA) report from July 2016, in which inspectors documented several “serious” instances of unsafe working conditions, as well as a follow-up report last March from GSA’s Office of Inspector General.

Repeated testing over the last three years has revealed the building, which dates back to 1941, has traces of 83 hazardous substances potentially harmful to the health of employees who come in contact with them.

GSA conducted its own analysis in November 2016 and found lead, cadmium, arsenic and other heavy metals in the ventilation system.

An air sample analysis performed since then showed that, at the time of the sampling, asbestos and lead were no longer in the air at the facility, but the union says GSA failed to follow OSHA’s recommendation to prevent contaminants from migrating from building basements and tunnels into upstairs offices or show that it has addressed the other 81 hazardous substances in the building.

According to a March 2019 report issued by the GSA’s own Office of Inspector General, GSA’s Public Building Service (PBS) spent more than $1.9 million on duplicative environmental sampling and analysis confirming hazards they already knew to be present but “failed to comprehensively address the deficiencies” or properly inform employees of the potential health risks.

The same GSA managers who have failed to act at Goodfellow, AFGE notes, also were admonished by the agency’s Inspector General in 2010 for endangering the health and safety of employees at the Bannister Federal Complex in Kansas City, MO, where one employee died in 2006.

WORKERS ARE DYING. ‘WE JUST WANT THEM TO CARE’
Wil Grant, president AFGE Local 3354 (USDA) says although OSHA and GSA’s own reporting have shown the presence of contaminants at the facility and GSA’s years-long knowledge of those contaminants, GSA has been reluctant to act.

“GSA is telling us we had five or six years in contamination but right now we’re within standards or guidelines,” Grant said. “What we’re asking is would anyone want to buy a house or work in a facility that has acceptable levels of contamination?

“We have seven people in one work area where three people lost their sense of taste and smell and had surgery for those conditions, but no one was speaking. We have had quite a few people that have passed away from cancer suddenly. We have one area where three people are in Stage 4 cancer. We have respiratory issues in some areas. It’s just really weird to have all these coworkers with fatal conditions and no one is being moved.

“We want to be off of this facility all together,” Grant said. “There are ways to do it. We could work from home. There are so many things they could absolutely do. We just want them to care about the people working in that facility, to care about their health and their well-being.”

Keena Smith, acting president of AFGE Local 2192 (Veterans Affairs), says the union has talked to several Congressional leaders and sent a letter to Congressman Lacy Clay outlining the situation and asking for his help. A Clay spokesman said the Congressman was aware of the situation and was in contact with the GSA.

“Our game plan now is to have an informational push with Congress and our Senators to get the powers to be, which would be the secretaries of all of our agencies, to get us off of this campus,” Smith said.

“We’re also looking for the people responsible for this to have everybody tested for all of the contaminants on that complex,” she said.
“People need to realize that most of our federal employees are veterans. This is how we’re treating our veterans. It’s horrible.”

‘BRINGING IT OUT FOR EVERYONE TO SEE’

Jonay McCall, acting president of AFGE Local 96 (also Veterans Affairs) said, “We’re bringing it out for everyone to see, but what makes us sad is the higher ups are not doing anything about it.”

In addition to moving employees out of the complex, McCall says AFGE is asking the government to help with medical testing for current and past employees.

“In the VA, we have employees that have left because they got a new job, but they are having health issues,” she said. “Our union has a team that’s here now helping fill out paperwork for Workers’ Compensation, but we did that ourselves.”