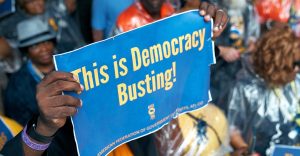 Union members play a critical role in protecting national security and deserve the right to have a voice in their lives at work. AFGE is urging members of Congress to protect the rights of DoD workers to join a union.

“We will fight this on every front and with every fiber of our being,” AFL-CIO President Richard Trumka (UMWA) said.

DoD workers have had the right to collectively bargain guaranteed to them by law for 58 years, since an executive order guaranteeing those rights was signed into law by President John F. Kennedy in 1962.

“Donald Trump wants to retreat from generations of common sense policy,” Trumka said, “for no other reason than he doesn’t like you.”