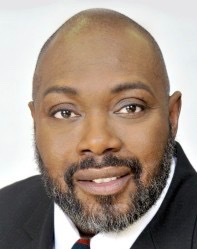 “We will be forever indebted to Richard Womack for the countless hours he spent meeting with faith, constituency groups and Labor leaders building the coalition to defeat Prop A in Missouri,” stated Lew Moye, president emeritus of the St. Louis CBTU Chapter.

This year’s honorees, recognized for their contributions for social justice, human and Labor rights in the St. Louis Metro Area in the tradition of Dr. King include:

25 YEARS IN
THE LABOR MOVEMENT

Womack has been in the Labor Movement for 25 years and has worked on countless campaigns and issues that changed the lives of everyday people. He played a prominent role in several political campaigns, directed get-out-the-vote programs in numerous states, and became experienced in handling grievances, contract negotiations and arbitration hearings. One of his most gratifying achievements was working intimately with the disability community and the U.S. Congress to pass the Americans with Disabilities Act.

Womack was destined to live a life of service to his community; it’s in his DNA. His late mother, Mattie Womack, was a deeply spiritual individual who instilled in him an unwavering caring and compassion for all people. His father, Richard Womack, Sr., is a civil rights activist and former leader in the Labor Movement, including serving as assistant to former AFL-CIO President John Sweeney.

Womack studied political science at Mansfield State College and is a graduate of the Negro Trade Union Leadership Council, the AFL-CIO Organizing Institute, and the prestigious National Labor College.

He has been honored with the National NAACP’s “Labor Leader of the Year Award,” the A. Phillip Randolph Institute’s “Community Activist Award,” CBTU’s “Labor Leader of the Year Award” and the Martin Luther King Jr. “Social Justice Award.”  He is currently vice president of the National A. Phillip Randolph Institute (APRI) and a board member of the NAACP Labor Committee and Rainbow Push Coalition.