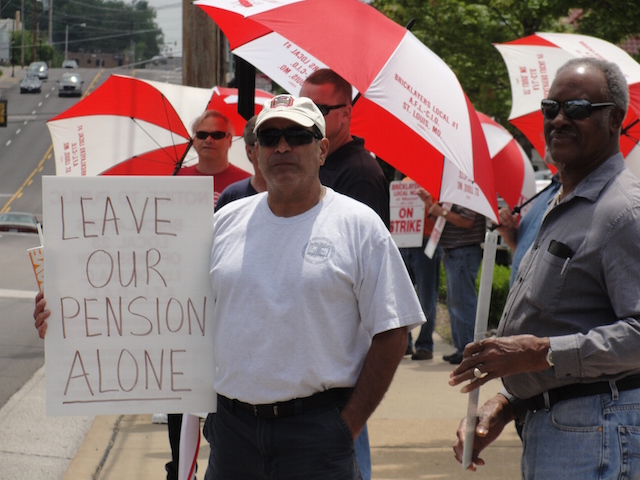 For the third time in as many contracts, Bricklayers Local 1 has been forced to strike the Mason Contractors Association (MCA) in order to protect hard-won benefits for their members, Local 1 Business Manager Don Brown said Monday, June 1, as picket lines went up at 6 a.m. June 1.

Eight and a half hours of weekend negotiations May 30 and 31 failed to bring any semblance of compromise on the contractors’ desire to kill the bricklayer’s pension plan, Brown said.

Some 850 Local 1 bricklayers struck starting at midnight, May 31, when their previous four-year contract with the MCA expired.

“Despite negotiations over the past several weeks and marathon talks over the weekend, the two sides have not been able to come to an agreement,” Brown said.

Both sides agreed to continue talking in an effort to find a resolution to the strike.

“We are ready to find a workable, reasonable solution over many issues, however, we are not going to let the contractors destroy the Bricklayers’ pension plan, a key issue in these talks,” Brown told the Labor Tribune.

Bricklayers are only picketing job sites where brickwork is under way.

However, many contractors who are not MCA members have already signed a new contract with Local 1. Work will continue on those projects.

“We have no desire to shut down the construction industry so there will be no blanket picketing of construction jobs,” Brown said.

Local 1 offered the MCA essentially the same terms as those offered to the non-member independent contractors. Those terms were rejected.

While Brown was clear the union would not negotiate in the press, previous articles in the Labor Tribune over the past four weeks have outlined what is believed to be the major stumbling block:

• Killing the union’s current pension plan, freezing its benefits and replacing it with a 401(k) style plan. This type of plan guarantees no benefits at all but creates a pot of investment money in each person’s name that is controlled by the fund’s investment advisors. If the economy were to sour again, there could be substantial losses in the fund which means there will be less money available for a bricklayer’s retirement.

“In other words,” Brown said, “Our members take all the risk and the contractors take none.”

Adding insult to injury, Brown said, neither journeyman bricklayers or apprentices would get any benefit improvements for the $1.38 the contractors want to pay into the proposed frozen plan that ultimately only benefits contractors.

• Legal fees: The contractor trustees want the Pension Fund to pay the costs of a lawsuit they have filed against the Fund to try and force this dual pension issue into arbitration, something the union says is a matter of negotiations, not arbitration.

LAWSUIT HAS IMPACT
FOR ALL UNIONS

If a court rules in the management trustees’ favor, contractors across America would be able to undermine the collective bargaining process and obtain through arbitration what they could not achieve through negotiations, potentially negatively impacting the retirements of millions of workers in pension plans.

“Our position is quite simple,” Brown said, “the pension plan is an issue of collective bargaining, period. We have no intention of letting one person determine the fate of our members’ retirement.”

“And on top of it all,” says Brown, “the contractor trustees want the Pension Fund – our members’ money – to pay for them suing us. Not going to happen.”

Some 850 Local 1 bricklayers, tuck pointers, and caulkers and cleaners are employed by 95 local companies. Of that total, 42 companies are covered under a single agreement with the MCA and 53 are independent contractors that have similar basic agreements.