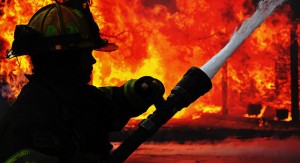 St. Louis – As the battle over fire fighters’ pensions rages in the city, Labor Tribune research for a new series telling the fire fighter’s story has uncovered a little known fact not publicly released by the City: the pension fund has earned almost $40 million in interest over and above the lump sum payments paid to fire fighters when they retire. The interest comes from the fire fighters’ own money - eight percent from their paychecks paid directly into the plan.

This is a complex story. The publicity surrounding it from the Slay Administration that has drowned out cogent facts favoring the fire fighters’ efforts to both save their pension plan and provide substantial costs savings for the City. To clarify the issues Labor Tribune will publish a series of stories in the coming weeks looking at the various aspects of the disput and will detail facts often overlooked or intentionally downplayed, information designed to portray fire fighters in a negative light. These are the very same fire fighters the City depends on to keep its residents safe and keep business and home owners’ insurance rates reasonable.

One of those facts: interest from the fire fighters self-contributions into their own pension plan has created a large pool of cash – almost $40 million - to help pay for retirement benefits, a cash pool no city employees (except police officers and fire fighters) provide.

As an example, a fire fighter with 35 years duty retired recently. He received a $100,000 lump sum payment for his contributions. However, $252,000 in interest earned on his money during that period stayed in the pension fund.

While the city decries this reimbursement, the City Administration downplays or simply and intentionally overlooks several critical issues surrounding it:

• Fire fighters are not eligible for Social Security.

• The lump sum reimbursement to retiring fire fighters being attacked by Mayor Francis Slay as one part of his plan to change the entire fire fighters’ pension system is a basic replacement for Social Security to help retirees supplement their pension, as Social Security would normally do.

• Other city employees do not have a contributory plan. In 1978, the City stopped the three percent employee contribution plan for their pensions and refunded all their payments.

• Over the years the fire fighters gave up salary increases and instead improved their pension plan knowing full well there would be no Social Security to supplement it. Improvements, by the way, approved by the Board of Aldermen.

• While all other employees upon retirement receive a pension and Social Security, the fire fighters do not thus ensuring a reasonable pension has always been paramount, said Fire Fighters Local 73 President Chris Molitor.

“Our guys gave up salary and other benefits to keep up a strong pension plan. Trying to change that now is a betrayal to all fire fighters who put their lives on the line every day.”

Realizing the fire fighters contributions do indeed provide a great deal of money for pensions that the City does not have to come up with, Mayor Slay’s new proposal calls for increasing the self-contribution to nine percent and eliminating the lump sum reimbursement going forward for both future hires and those currently under the plan who made the self-contributions for years knowing they would be eventually returned. Thus, all the past sacrifices by fire fighters on their paychecks could be totally lost.

The fire fighter’s pension issue is not just about pensions, although the casual reader would surmise that from the publicity.

“The real issue here is the City’s desire for total control over the pension fund,” says Molitor. He points out that the mayor’s plan would totally eliminate the current system and replace it with one of his own creation, and under his control with little checks and balances.

“That in itself is illegal, our lawyers tell us, and we’re prepared to sue if that happens,” Molitor stressed.

In the coming weeks, the Labor Tribune will outline a number of issues:

• Fire fighters efforts to reach a compromise and how the mayor rejected them outright.

• The competing plans and efforts by Board of Alderman President Lewis Reed and the State Legislature to mediate a compromise.

• The Administration’s attack on politically effective Fire Fighters Local 73, an attack that has been underway for some years, says the fire fighters.

• How the fire fighters are actually financing the City’s efforts to castrate them.

• A thorough review of the pension issues.

• The legal issues now and in the past and the wasteful cost to city taxpayers as case after case, including an appeal to the Missouri Supreme Court, was resolved in the fire fighters favor.

Jefferson City – A compromise pension reform bill for St. Louis fire fighters authored by Representative Mike Leara (R-Sunset Hills) unanimously voted “do pass” by the Committee on Retirement here last Thursday, was lauded by fire fighters and St. Louis Board of Alderman President Louis Reed as a reasonable compromise but was immediately denounced by the Slay Administration.

Under current law, the Missouri Legislature, serving in a check and balance role to prevent politics from reigning over the Fire Department, proposes major issues for the department which must be approved by the St. Louis board of Aldermen before being implemented or rejected entirely. The aldermen have total control over all issues.

Meanwhile, as the Labor Tribune went to press Monday, a radical change bill proposed by Mayor Francis Slay was to be taken up for a vote by the Board. The bill would kill the current pension system and set up an entirely new program with substantially lower benefits, a program never negotiated with Fire Fighters Local 73.

The St. Louis Labor Council has condemned Mayor Slay for his refusing to bargain in good faith with the union. Its resolution was critical of the mayor who as a member of the Board of Aldermen never voted for union employee salary increases and in 2008 as mayor blocked passage of a multi-year pay ordinance collectively bargained for city employees. It called on aldermen to reject the two board bills being considered Monday.

The Fire Fighters Pension Board has already said it would sue if the Slay bills pass.  Details next week.