Fairness and integrity are at the heart of both unions’ boycotts:

• ‘Journalistic integrity’ of the station is challenged by the Police Officers Association over the station’s live report on the Ferguson crisis in front of the home of the involved police officer on the same day the officer’s name was released.

“KSDK Channel 5 sunk to an all time low. They not only put Officer Wilson’s life, family, and property in danger, they disrupted and threatened an entire neighborhood,” said infuriated SLCPA President Gabe Crocker.

• Human decency and fairness of Channel 5 is challenged by IBEW Local 4 because of their efforts to try to destroy the lives of the station’s veteran engineers by wanting to assign their highly skilled work to anyone at any time totally disregarding the veteran engineers’ dedication and loyalty to the station.

“Our members took a wage cut in 2009 when owner Gannett said they faced a fiscal crisis, and they have not had a raise since. Then they purchase Belo Broadcasting for over $2 Billion. Now they tell our members, who made the sacrifice to help them, that they want to let anyone do their jobs and pay the scabs the lowest salaries they can get away with,” said Local 4 Business Manager Mike Pendergast.

Pendergast and Crocker urge Labor Tribune readers to TURN OFF CHANNEL 5 and continue the boycott to send Channel 5 Station Manager Marv Danielski a clear message: This kind of treatment of their employees and a lack of professional decisions in the newsroom will not be tolerated by this community.

SLCPA’s Crocker took the boycott to another level urging advertisers who support law enforcement to withdraw their ads from the station. 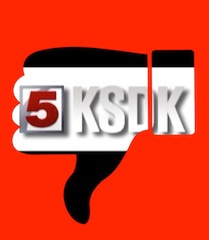 “I encourage every citizen, every law enforcement supporter, and every individual who has enough wherewithal to realize just how deviant and disgusting KSDK’s news department has acted in this matter to “TURN OFF KSDK”, delete any downloaded KSDK Apps, and send letters to any business that advertises with KSDK.”

“In light of the debacle at the Kirkwood school building and the blatant disregard for P.O. Darren Wilson’s safety, I think it’s pretty safe to say that KSDK’s reporting is not even befitting of a supermarket tabloid,” Crocker said.

“Whoever is running that news organization is apparently living out where the busses don’t run. It’s disgusting, sensationalized journalism and if it was in paper form, I wouldn’t use it in the bathroom.”

DISDAIN FOR ITS WORKERS

Local 4’s Pendergast again blasted the station’s obvious disdain for its own workers, who have worked hard to help the station and the highly profitable Gannet Corporation with pay cuts, only to be “rewarded” with efforts to kill their jobs.

“This is both inhumane and corrupt management at the highest levels,” Pendergast said. “That disdain is again clearly shown when the station puts a police officer’s life, and the lives of his entire family, in danger by giving out his address in a highly emotional, explosive situation that is Ferguson.”

Readers are urged express their displeasure by contacting Station Manager Marv Danielski at:

Tell Danielski you’re turning off Channel 5, and tell him why. And encourage all your friends and neighbors to do the same.