‘The biggest challenge facing our members and workers… politics.’ 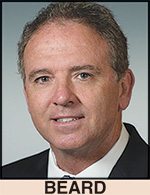 Beard, of Waterloo, started his career as an iron worker in 1979, working on a permit out of Local 392 in East St. Louis.

PATH TO LEADERSHIP
Some are born leaders, the saying goes, others have it thrust upon them.

Beard would place himself in the latter category, despite his ascension through the ranks of the Ironworkers local and international.
“I’ve never pursued office as far as a full-time staff officer,” he said. “I loved working in the field. It was just a passion of mine. I never really worked for money, I worked for passion. I loved it. The rest just kind of happened. It’s worked out well for me.”

Beard served as a trustee on Local 392’s executive board, then recording secretary and vice president before becoming business manager.

“We had a guy retire and he appointed me, and I took it,” Beard said.

That happened in 2003, and Beard held the position until 2013, when he was named president of the Ironworkers District Council of St Louis and Vicinity, which includes eight outside locals and three shop locals representing ironworkers from Missouri, Illinois, Indiana, Kentucky, Iowa, Arkansas and Kansas.

As an international vice president, his territory covers all of Colorado Kansas, Arkansas, Missouri, part of Iowa, Illinois, Kentucky and Tennessee.

WORK AND POLITICS
With construction on the uptick, it’s a good time to be a union iron worker.

“It’s as good as it’s been since the recession, but it’s still nowhere near where it was in 2008 and 2009,” Beard said. “We’ve got some political headwinds here that just won’t stop.

“I don’t think that our members understand how important politics are. Right now, there’s a lot of members that are all behind Trump, but they have no idea how the federal government is trying to put the squash on us. It’s not so much that they hate the unions it’s just they don’t want anybody having any political power. We’re the only ones that speak for the workers, and they just don’t want anyone to have a voice.

“What’s the biggest challenge facing our members and workers? I’d say it’s politics,” Beard said. “They’re trying to put an end to unions so the workers don’t have a voice.”

TRUMP’S UNION-BUSTING
President Donald Trump has been at war with Organized Labor since he took office in 2017. Yet even after all of his attacks on Labor, union members still support him.

In addition to Beard’s comments, here are some key issues that should be of real concern for workers: