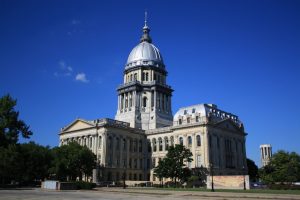 The Democratic Party’s difficulties were evident in the Metro-East and Illinois as well as nationally. One bright spot was the victory of Tammy Duckworth over incumbent U.S. Senator Mark Kirk. Another was that of Susana Mendoza for state comptroller.

Union-supported Democrats were successful in some legislative races and managed to keep substantial House and Senate majorities despite some losses. In a hard-fought local race, Democratic challenger Katie Stuart of Edwardsville defeated the incumbent, Dwight Kay of Glen Carbon, with 52 percent of the vote in the 112th House District.

State Rep. Dan Beiser (D-Alton) fought off a strong challenge in the 111th District from Republican Mike Babcock. Beiser had 53 percent of the vote.

State Rep. Jay Hoffman (D-Swansea) turned back his challenger, Katherine Ruocco, with 59 percent of the vote in the 113th District. As chairman of the House Labor and Commerce Committee, Hoffman plays a crucial role for Labor.

CJ Baricevic, the Democratic nominee in the Illinois 12th Congressional District, lost to incumbent Republican Mike Bost, who had 54 percent to Baricevic’s 40 percent. Green Party candidate Paula Bradshaw accounted for most of the remainder. Baricevic did win in his home county, St. Clair, and by a narrow margin in Madison County.

Democrats and union supporters sustained some major losses to candidates funded by Governor Bruce Rauner in southern Illinois. Senator Gary Forby, a stalwart union supporter in the 59th District, conceded to his Republican challenger, Dale Fowler, mayor of Harrisburg, with Fowler getting 55 percent. Representative John Bradley, a 13-year House veteran and assistant majority leader, conceded to Dave Severin, a Republican, in the 117th District. Bradley had 44 percent. A brighter spot was Representative Brandon Phelps, 118th District, who swept to re-election with 58 percent of the vote over Jason Kaslar. The three Democrats had been targeted as a group by unprecedented Republican attacks funded by Rauner.

In the 114th House District, Democrat newcomer Latoya Greenwood landed a strong win with 57 percent of the vote against Republican Bob Romanik, She will replace the retiring Eddie Jackson.

In the area just north of the Metro-East, appointed Republican Representative Avery Bourne easily defeated a strong bid by Democratic challenger Mike Mathis of Gillespie in the 95th House District, winning with 57 percent of the vote.

Also, former Lieutenant Governor Sheila Simon, (D-Carbondale) conceded her Senate race in the 58th District to Waterloo lawyer Paul Schimpf, a Republican who took 61 percent of the vote. Newcomer Marsha Griffin lost in the 115th House District to a Republican, Terri Bryant, who had 56 percent..

St. Clair County Board Chairman Mark Kern (D-Belleville), a high priority for Labor supporters, had a strong win against  Republican challenger Rodger Cook, 62,506 to 54,834 with all votes counted. Democrats swept several other county offices that were up for election. They also kept control of the County Board, 18 seats to 10.

One of the closest decisions of the night was also a huge blow to labor. Madison County Board Chairman Alan Dunstan lost to Tea Party Republican Kurt Prenzler 62,499 to 61,993 with all votes counted. Prenzler will face a united group of Democrats in the other county offices, including State’s Attorney Tom Gibbons, who won re-election easily. The County Board turned from Democrat to Republican with three incumbent Democrats losing. The new make-up is 15-13 Republican, with one independent.

The Belleville News-Democrat reported that Republicans won the two Appellate Court races in southern Illinois, with John Barberis leading Brad Bleyer and Randy Moore ahead of JoBeth Weber in final but unofficial tallies. Both Democrats had strong Labor support, but their races show how treacherous it has become for Democrats to win across southern Illinois.

The newspaper also said combined vote totals showed St. Clair County Chief Circuit Judge John Baricevic, a longtime Labor supporter, barely losing his bid for re-election to a Republican, Ron Duebbert. Baricevic won in St. Clair County alone, but four neighboring counties’ votes changed the outcome to 79,921 for Duebbert and 79,111 for Baricevic, the newspaper reported. He is the father of CJ Baricevic. Another Circuit Judge, Robert LeChien, won his bid, and a third judge, Robert Haida, was unopposed. The three Democratic judges had decided to resign their positions and run for re-election instead of facing a retention vote, which requires 60 percent.