Granite City – Just days after meeting with Metro East Steelworkers and local officials, the U.S. Department of Commerce issued a second ruling that will result in new duties on imported steel products.

The ruling is great news for domestic steel producers, which have been slammed by a double blow of subsidized imports and reduced demand for pipe from oil producers.The department ruled March 1 that cold-rolled flat steel products have been dumped in the U.S. marketplace, violating international trade laws.

As a result, those products from China and six other countries will be taxed at varying rates, including a whopping 266 percent for the Chinese steel.

The tariffs begin now, although the case must still go to the International Trade Commission, which is to make a final determination in this case and possibly two others. China is often described as the leading player in steel dumping, but steel from Brazil, India, South Korea, Russia, Japan and the United Kingdom also will be subject to increased tariffs.

Those rates are 71 percent for Japan, 39 percent for Brazil, single-digit rates for India and South Korea; and varying rates by company for the United Kingdom and Russia.

“Enforcing our trade laws isn’t a gift, it’s a right,” he said. “It’s well past time for action. The public is angry, the USW members are angry, all of America’s unions are, too – for good reason.”

This was the second major ruling by the department that imports have been dumped in the U.S.

A third steel dumping case remains before the department, involving imports of hot-rolled steel products. It is scheduled to be decided by March 14.

All three cases will go before the International Trade Commission for a final ruling.

Madison County Board Chairman Alan Dunstan, who led the delegation to Washington D.C., said the rulings represent a big step toward giving U.S. steel makers a fair chance to compete.

“The steel industry, and for that matter all of our country’s manufacturers, must have a chance to compete on a level playing field,” he said. “Given the opportunity to compete fairly, manufacturing in America could again flourish.”

Delegation members said the December decision has already had an effect, including raising some steel prices and keeping about 140 workers on the job at Granite City Steel, even though that plant has most of its workers on indefinite furlough for lack of demand.

U.S. Steel recently spent $110 million on a new caster system at Granite City, indicating the plant will eventually go back on line.

“This is one of their more productive plants,” Dunstan said. “I do think Granite City Steel will come back.”

Dan Simmons, president of USW Local 1899, the largest local at Granite City Steel, agreed and credited Dunstan and Granite City Mayor Ed Hagnauer for taking the case directly to the officials at Commerce who are responsible for taking action.

“Alan’s done something, along with Mayor Hagnauer, that nobody’s ever done,” Simmons told the Greater Madison County Federation of Labor. “They’ve now seen the impact of the layoffs and the idling of the U.S. Steel facility. But it wasn’t just for our plant, it was for manufacturing as a whole. The community has a lot at stake.” 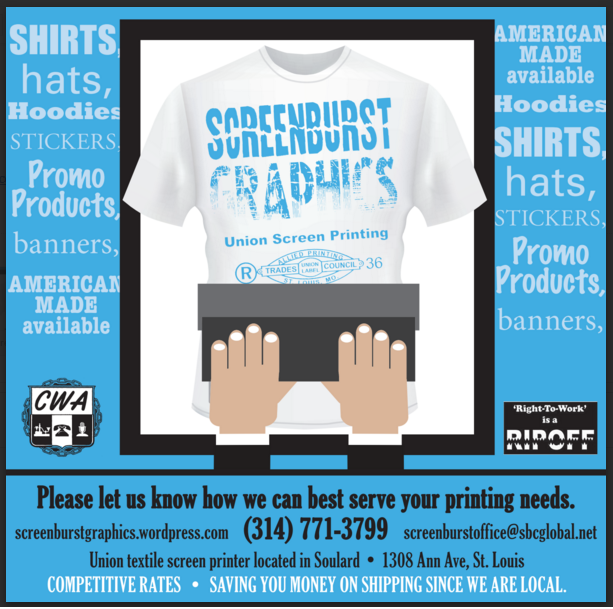 “These people are cheating,” he said. “These countries are coming here, and bringing in inferior products to boot, but at such a cheap price because of government subsidies–they’re eating the cost.

“Once the playing field is leveled, we can compete against anybody.”

Part of the industry’s problem, Dunstan said, is that while international steel demand is down, China’s manufacturing capacity is way up, accounting for 400 million tons a year of excess capacity out of 700 million tons worldwide.

Of 10 steel plants in China, nine are government owned. To keep its industry afloat as its own economic growth ebbs, China is subsidizing its prices – or dumping its steel.

“Manufacturers in fair-market economies around the globe are being forced out of business, and foreign governments have responded with swift and substantial trade remedies. America needs to do the same,” Dunstan said.

Delegation members said the Commerce representatives were not only interested and concerned, but wanted to take action to help American workers.

“I felt they were eager to hear our side of it,” Simmons said. “They’re tied up in the enforcement part of it. They don’t get to see the faces, and how people’s lives are affected by their decisions.”

The group had similar meetings a year earlier, which Simmons said contributed to the development of the new, bipartisan American Trade Facilitation and Enforcement Act, also called the Customs Bill, just signed on Feb. 24 by President Obama.

That law will speed up the process of filing and completing trade cases – the old laws required three years of economic damage before even filing, and the new law eliminates that. It empowers Customs and Border agents to open investigations into steel dumping, such as when importers misrepresent where steel products came from.