How do you celebrate the holidays? If you tend to imbibe in a bit too much yuletide cheer, clip this out and hang it on the fridge. 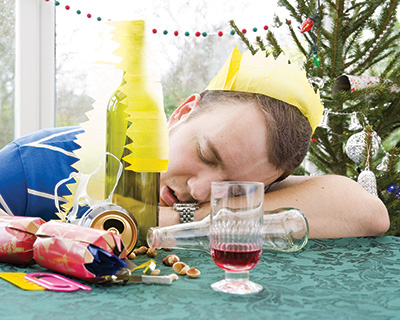 We’ve all done it. Drinking too much alcohol often leads to fuzzy memories, lapses in good judgment, tattoos and a morning-after sensation that’s less than pleasant. It’s the metabolites of the alcohol that cause of the nausea, fatigue and headaches. Besides, alcohol is a diuretic and makes you urinate out more fluid than you actually take in. That can lead to dehydration, which makes the alcohol metabolites stay around longer in your system and make the hangover worse and last longer.

Everyone has a hangover cure, but which ones really work? Here are some remedies that you should try — and others that are a waste of time.

‘HAIR OF THE DOG’
Having another alcoholic drink may be a feel-good hangover cure (at least temporarily), but this traditional college approach to ease a hangover really doesn’t help. Even though the thought of a Bloody Mary may appeal to you, a Virgin Mary is a much better choice the morning after.

“The worst thing to do is to have another drink,” says Charles Cutler, MD, an internist in Norristown, Pa., and the chair of the American College of Physicians’ board of governors in an article on health.com. The alcohol may temporarily help your symptoms but could hurt in the long run. Hangovers make you feel horrible because alcohol is toxic.

HAVE A CUP OF JOE
Another traditional cure, the caffeine found in a cup of coffee can give you a short-term boost, but its dehydrating effects could limit its effectiveness as a hangover cure. Caffeine, which will wake you up, can also dehydrate you, potentially making the situation worse.

DOWN SOME SLIDERS
A greasy breakfast for a hangover remedy may give your body a short-term boost.  Besides glucose, alcohol reduces the amount of circulating free fatty acids in the bloodstream. A heaping helping of bacon and eggs will ease hangover anguish but it’s just going to give you heartburn. Take it easy on your body with some cereal and fruit.

EAT SOME ASPARAGUS
Now this one actually works. The Journal of Food Science has revealed that this vegetable might be the cure for your post-partying pain. A study from the Institute of Medical Science and Jeju National University in South Korea tested the effect that eating asparagus has on hangovers. The results showed that amino acids and minerals found in the vegetable can protect liver cells from toxins. This process can help prevent nausea, fatigue, and headaches.

DRINK MORE WATER
This works, too. Drinking plenty of water or other hydrating fluids is a simple way to treat hangovers. While it won’t offer a complete hangover cure, it definitely helps. Alcohol thins the blood, which is 70 percent water, so it can affect the fluid balance. Drinking water helps restore necessary fluids and can help the bloodstream and circulatory system carry nutrients and oxygen to the tissue and remove the wastes from a night of excessive consumption (which is a nice way of saying you got wasted).

TOAST AND JAM
Eating toast with jam or honey is a traditional method used to treat hangovers, but evidence suggests that any high-carb, high-sugar snack might give you only a temporary boost.

SPORTS DRINKS
The extra electrolytes — really just salts and sugars — found in sports drinks such as Gatorade and Powerade might give them an edge over plain old water to treat a hangover.  Sports drinks will elevate blood glucose and can elevate sodium levels, which help muscle cells uptake and use water, leading to quicker rehydration.

TAKE VITAMIN C
Dr. Carolyn Dean of the Nutritional Magnesium Association (yes, that is a thing) says that vitamin C and magnesium can help the body break down alcohol and eliminate it from the body, making these two supplements a viable hangover remedy. “One of the most absorbable forms of nutritional magnesium is magnesium citrate powder, which can be taken with hot or cold water,” said Dr. Dean.

WORK IT OUT
Of all the possible and popular hangover cures, experts say that working out is the best, improving circulation and pumping up your mood-boosting hormones. The only hurdle is talking yourself into doing it. Exercising during a hangover should be limited to low-to-moderate intensity exercise, since the hangover will negatively impact cognitive ability, motor control, and coordination. In other words, don’t fall off the treadmill.

TAKE AN ALKA-SELTZER
Alka-Seltzer turns 88 this year, and the famous fizzy medicine has probably been used to treat hangovers for nearly that long. In 2001, the company even introduced a Morning Relief formulation specifically for hangovers. All Alka-Seltzer varieties contain sodium bicarbonate (also known as baking soda), which will help settle a queasy belly by neutralizing stomach acid. Still, other ingredients, notably aspirin and citric acid, may irritate your stomach after a night of heavy drinking.