Home Illinois News Illinois AFL-CIO’s Michael Carrigan honored for his years of service to the... 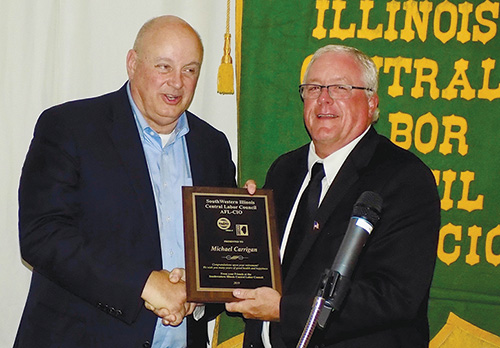 Belleville, IL – Illinois AFL-CIO President Michael Carrigan (left), who is retiring later this year, was a special guest at the Southwestern Illinois Central Labor Council awards dinner on Aug. 29 at Bel-Aire Bowl, speaking about the importance of Illinois’ new minimum wage law, which will raise the minimum wage in the state to $15-an-hour by 2025. “Helping people on the lowest rungs of the ladder is where we needed to start,” Carrigan said. Council President Scot Luchtefeld (right) presented a special award to Carrigan recognizing him for his years of service. – Labor Tribune photo