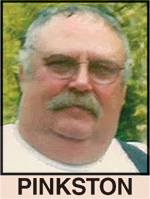 Brother Pinkston was born in East St. Louis, Ill., and grew up in Cahokia, Ill., raised by his father and grandmother. He graduated from Cahokia High School and was a U.S. Army veteran, serving from 1967 to 1970 with one year overseas during the Vietnam War. He was honorably discharged as a Chief Warrant Officer and helicopter pilot.

After his return from the Army, he was a film editor for Channel 11 in St. Louis. Later, he joined Local 6 and was a stagehand from 1972 to 2004 when he retired. He enjoyed riding his Harley Davidson motorcycle, St. Louis Cardinals baseball, vacations, cruises, visiting family, barbecuing and collecting knives.

He was preceded in death by his father, James C. Pinkston; his mother, Mary Pinkston (nee Brouse); his grandmother, Ilene “Toots” Pinkston, and his stepsister, Darla.

A graveside service and interment was held July 8, 2019, at Jefferson Barracks National Cemetery in St. Louis. Memorial contributions may be made to Disabled American Veterans at www.dav.org.