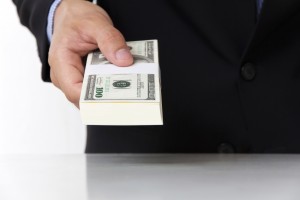 “… today’s GOP is not interested in fair fights or trusting voters to decide anything.”

How far will the most powerful Republicans go to shield their top donors’ identities?

New records in political hypocrisy are piling up in Washington, starting with Republican Senate Minority Leader Mitch McConnell, whose recent American Enterprise Institute speech went overboard in complaining that liberals posed the greatest threat to the First Amendment in decades because they are pushing government regulators and courts to force politicians to disclose the names of their million-dollar donors. Even worse, McConnell cried, the White House is in on this effort.

“The danger comes from a political movement that’s uncomfortable with the idea of groups it doesn’t like speaking freely, and from an administration that has shown an alarming willingness to use the powers of government to silence these groups,” began McConnell, who went on to compare today’s treatment of Republican billionaires to African-American victims of race-based harassment in 1950s Alabama.

Some political lies are so breathtaking and shameless that it takes a barrel of ink to unwind them. But McConnell’s latest defense of secretive fat-cat donors – which include corporations that might not want their customers to know they're giving millions to Karl Rove’s Crossroads GPS – has unleashed an inky torrent, and not just from liberals.

“McConnell is not the only hypocrite here, although he wins the title of Hypocrite-in-Chief,” wrote Norman Ornstein, an American Enterprise Institute resident scholar, in response to McConnell’s AIE speech. “This may set a new standard for chutzpah.”

“I have from time to time been tempted by the sect of Unlimited Donations, Unlimited Disclosure,” wrote Washington Post opinion editor Fred Hiatt, referring to McConnell’s long-held view – until now – that campaign funds should be unregulated but disclosed.

“The temptation turns out to have been nothing but a trick. The Republicans, apparently, never meant it. Now that they have Unlimited Donations, or something pretty close, they don’t want Unlimited Disclosure after all.”

“On the right these days, the rhetoric is all about a liberal siege,” Rick Hasen, an election law blogger and legal scholar wrote in Politico. “Despite Republicans’ majority in the House, its filibuster power in the Senate, a sympathetic Supreme Court, and the great power of business groups – the language of threats is pervasive.

“But look beyond the rhetoric and you can see what’s really going on: Those with power want to wield it without being accountable for their actions.”

SAY ANYTHING, DO ANYTHING

Hasen’s analysis sums it up. The Republicans, led by McConnell, will say anything to do whatever they want in political campaigns. The fight over disclosing campaign contributors to GOP shadow groups is no different than the party’s efforts to tilt state ballot-access laws, with measures like tougher voter ID requirements, to shape the electorate in its favor.

Although the GOP seems destined to lose this fight in the long run because the U.S. Supreme Court has solidly backed campaign finance disclosure, that has not stopped Republicans, following McConnell, from making every effort to delay the inevitable until after the November election, when it will be mostly a moot issue.

In the Senate … 10 Republicans led by Utah Sen. Orrin Hatch signed a letter attacking the Internal Revenue Service – which McConnell called the “speech police” – for seeking information about conservative political groups that were incorporated as nonprofit charities but which instead have been primarily engaged in partisan electioneering.

“I think the Republicans in Congress are running interference for their followers and supporters out there,” Marcus Owens, former director of the IRS Exempt Organizations Division, told Roll Call. “And they are probably building a firewall against what’s probably inevitable—when groups like Crossroads GPS get audited.”

Indeed, the IRS recently revoked the nonprofit tax status of a small group, Emerge America, which seeks to elect Democratic women. It has also been sending detailed questionnaires to many Tea Party groups incorporated as nonprofits – which led McConnell to compare that action to Richard Nixon's White House "enemies list."

What McConnell and other Republicans fear is that revealing the GOP’s top funders – whether individuals or corporations bankrolling front groups – will subject them to scrutiny, criticism and even accountability by the public, including their customers.

Indeed, a coalition led by ColorOfChange.org has prompted 20 large corporations including computer-maker Dell to discontinue their financial support of the American Legislative Exchange Council, a conservative think tank that has helped GOP lawmakers in many states adopt laws narrowing voting rights.

“It’s hard to know with whom one can do business,” Bradley A. Smith, also a former Republican Federal Election Commissioner, lamented in a recent Wall Street Journal online column. “We’ve been told that if you don’t like what Rush Limbaugh or Glenn Beck says on the radio, you should boycott businesses that advertise on their shows. ”

For years, McConnell has told reporters and members of his own party that campaign finances should be fully deregulated but disclosed –meaning that anyone should be able to contribute any amount to a political campaign, but the public should be able to know about it through disclosing those donations before Election Day. But now, McConnell has said liberals’ assumptions about the role of money in politics upend that formulation.

“There’s another element to these [campaign finance reform] efforts that’s less widely understood,” McConnell told AIE, “but that I believe is essential to understanding why it is that liberals have been working so hard to regulate political speech over the past four decades. It involved the great assumption behind all of their campaign finance efforts: that the collision of private interests with politics is somehow inherently corrupting.

“This is the great, untested premise behind all these efforts to regulate political speech. And few people stop to think of just how radical it is.”

To suggest that the confluence of money, power and influence is untested is another big lie.

Millions of Americans, including federal judges, have contemplated this equation and have concluded that the more money dominates the political process, the more the voices of more modest Americans are eclipsed.

McConnell’s "analysis" is also out of step with the Supreme Court, where, apart from Justice Clarence Thomas, the justices have repeatedly affirmed the value of disclosing campaign contributions.

As Justice Anthony Kennedy wrote in 2010’s Citizens United ruling, “The First Amendment protects political speech and disclosure permits citizens and shareholders to react to speech of corporate entities in a proper way. This transparency enables the electorate to make informed decisions and give proper weight to different speakers and messages.”

Campaign finance experts – including former Republican FEC Commissioner Trevor Potter, who more recently has been Stephen Colbert’s super-PAC attorney – were quick to say Kennedy’s Citizens United declaration was wishful thinking, because the latest loopholes involved creating nonprofit front groups that do not have to disclose donors’ names – just the amounts – and using those groups for massive political ad buys.

Moreover, McConnell’s latest critics—such as WaPo's Fred Hyatt—noted that even conservative Justice Antonin Scalia has said that participants in American democracy need to stand by their words and their political messages.

“There are laws against threats and intimidation; and harsh criticism, short of unlawful action, is a price our people have traditionally been willing to pay for self-governance,” Scalia wrote in a 2010 decision, Doe v. Reed.

“Requiring people to stand up in public for their political acts fosters civic courage, without which democracy is doomed.”

Indeed, part of the vehemence in McConnell’s cowardly tirade is that he knows the slow-but-steady enforcement wagons are encircling his party’s latest law-flouting tactics.

What the GOP’s stonewalling spokesmen surely know is that their party’s most enduring patrons – not the political venture capitalists bankrolling various super-PACS supporting 2012 presidential candidates, but major corporations and trade groups that send fleets of lobbyists to Congress – do not want to be seen as funding bile-filled political attacks.

Conversely, campaign finance reformers, from longtime open records champions such as Democracy 21, or the Campaign Legal Center led by Potter, and others, have been pushing the FEC, Congress, the IRS, the White House and courts to enforce disclosure laws now on the books, or to fix loopholes that have emerged in recent years.

Efforts by Democratic Sen. Sheldon Whitehouse of Rhode Island and Rep. Chris Van Hollen of Maryland to promote disclosure through new legislation have been blocked in the Senate by McConnell – and by fellow Republicans who follow the Minority Leader.

Meanwhile, the legal noose is tightening.… the top lawyer for the Obama campaign and Democratic National Committee wrote to the FEC to initiate enforcement actions against Crossroads GPS, saying it would sue if the FEC did not quickly act.

“The case for enforcement of the law against Crossroads has been pending before the FEC since 2010,” wrote Robert Bauer, in a letter that cited an earlier June federal court ruling that supported disclosing donors to politicized nonprofits. “All that remains is the issue of when Crossroads will disclose. Will Crossroads fight this out, knowing that disclosure is inevitable but looking to delay until after the election?”

Bauer has been around long enough to know the answer to his question. Of course, the Republicans, marching lockstep with McConnell and Rove, will do everything they can to delay disclosing their multimillion-dollar donors’ names. In the meantime, ads from the GOP’s politicized nonprofits will hit presidential battleground states and targeted congressional races from coast to coast.

Americans deserve to know who is behind the political messages that will be dominating the airwaves in 2012. As Scalia said, standing by one’s political views may require civic backbone.

But, then again, today’s GOP is not interested in fair fights or trusting voters to decide anything.

(Steven Rosenfeld covers democracy issues for AlterNet and is the author of "Count My Vote: A Citizen's Guide to Voting" [AlterNet Books, 2008] Reprint from www.Alternet.org.)