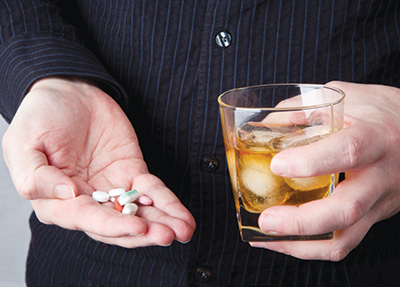 Got a summer cold? A shot of whiskey might sound good, but resist the urge. Booze and prescription medications can be fatal.

While a lot of attention is given to the opioid epidemic, there’s another legal drug that many prescription takers don’t think twice about: alcohol.
“The number of people who end up going to the emergency room each year for an alcohol and drug interaction has been going up,” says the National Institute on Alcohol Abuse and Alcoholism (NIAAA).

Here are some notable drugs, and the dangers of mixing them with booze:

PAINKILLERS
Mixing opioid-based painkillers with another depressant — alcohol — can be lethal. Doubling up on depressants can suppress the brain stem activity responsible for basic functions like breathing and heart rate. A study suggests that even a relatively low dose of the prescription painkiller oxycodone and the equivalent of one alcoholic drink for women (two for men) in the span of an hour led to a 50 percent reduction in breathing compared to the painkiller alone.

SLEEPING PILLS
A class of drugs known as benzodiazepines, notably Valium and Xanax, are among the most common prescribed to treat anxiety. They’re relatively safe — unless you add alcohol. Combining these two depressants can interfere with your central nervous system, and the results can be fatal.

ANTIDEPRESSANTS
This is a huge class of drugs, and the active ingredient in many of them is monoamine oxidase inhibitors (MAOIs). When MAOIs interact with a compound found in beer and red wine, they can create a dangerous spike in your blood pressure.

ALLERGY MEDICATIONS
Over-the-counter substances that make you sleepy should be avoided if you’re drinking. Antihistamines like Benedryl can help ease allergy symptoms like cough, runny nose, and itchy eyes, but drowsiness is a major side effect, and alcohol will make it worse.

ACETAMINOPHEN
This popular over-the-counter painkiller (like Tylenol) carries the risk of liver damage for chronic drinkers. Even the bottle labels include a warning to that effect, points out the Food and Drug Administration (FDA).

COLD MEDICINES
The cough syrup or nasal decongestant that helps you get through a head cold often contains ingredients that interact poorly with alcohol, leading to drowsiness and dizziness. If you’re taking cold meds, avoid hot toddies and other alcoholic beverages.

NSAIDS
The class of painkillers known as nonsteroidal anti-inflammatory drugs includes such staples as aspirin and ibuprofen and stronger prescription drugs for treating conditions like arthritis. Combining any version with three or more alcoholic drinks a day can raise your risk of stomach bleeding. It could also harm your liver and kidneys.

ANTIBIOTICS
Some antibiotics block the breakdown of alcohol, so if your doctor prescribed something and you’re only going to be on it for a week or so, it’s best to just wait it out and abstain from alcohol for that time.

BLOOD PRESSURE MEDICATIONS
More than 100 million Americans have high blood pressure, a precursor to heart disease, according to the American Heart Association (AHA). The medications can lower your blood pressure, but they don’t mix well with booze. Many high blood pressure drugs can cause sleepiness, fainting, and irregular heartbeat when mixed with alcohol.

HIGH CHOLESTEROL MEDICATION
Roughly 43 million Americans are taking medication to help control their high cholesterol, according to the Centers for Disease Control and Prevention. But if you mix cholesterol-lowering pills with regular drinking, you could end up with liver problems down the road.

ADHD MEDICATION
Even though these drugs tend to be stimulants, they contain ingredients that, combined with alcohol, can lead to dizziness, drowsiness, and increased risk for heart and liver problems, depending on the drug.

PRESCRIPTION-STRENGTH ANTACIDS
Drugs used to treat heartburn and indigestion can increase the rate at which your body absorbs alcohol, enhancing its effects. A rapid heartbeat and sudden changes in blood pressure can be side effects of imbibing while taking these.

For more information on drug interactions with alcohol, visit niaaa.nih.gov/publications/brochures-and-fact-sheets/harmful-interactions-mixing-alcohol-with-medicines.