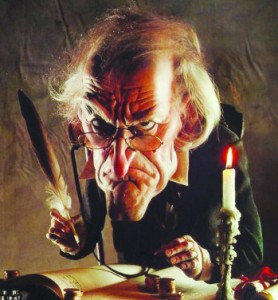 Each year, St. Louis and Kansas City Jobs with Justice member organizations nominate candidates for ”Scrooge of the Year.”

While bargaining the most recent contract with bus and Metro drivers, Nations tried to take away the pension from all new employees hired by Metro. That would have left new workers with little or no retirement, and would have hurt current employees now working for the agency.

During contract negotiations, Metro management also attempted, on numerous occasions, to racially divide workers and divide the workers along job classifications between mechanics and operators during the negotiations.

One of the most egregious incidents occurred when a member of Metro’s negotiating committee distributed a recipe for “Oreo cookies” to members of Local 788 at the conclusion of a heated bargaining session.

The majority of Metro bus and train operators are African-American. Local 788 President and Business manager Mike Breihan is white.

From kicking 12,000 children from low income working families out of daycare, to blocking tens of thousands of people with disabilities and senior citizens from registering to vote, to taking food away from more hungry workers who can’t pay the grocery bill than nearly any other state social services administrator in the country, Campbell is an overachiever in Scrooge-like behavior.

Chipotle franchisee Tim Healy was nominated by Show Me $15, the coalition of fast food and other low-wage workers struggling for higher wages and the right to form a union without retaliation.

Healy is vehemently anti-workers’ rights, and Show Me $15 has been in a long-term struggle against his franchise.