Home Elections Nicole Galloway: ‘I’ll always have your back’ 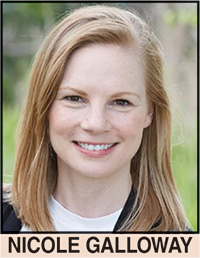 Every day, I hold a firm sense of where I come from. My family worked their way into the middle class with the support they had from a union.

In 1963, my great-grandfather Pop helped build the Arch as a member of Operating Engineers Local 513. I have an uncle who still works a crane in the same local. Other family members followed in that tradition, and they’ve taught me that being part of a union isn’t just about good jobs and good benefits. It’s also about high quality work you are proud of and a support system that is a family.

My grandpa’s son, my Uncle Ed, was also a member of 513. Shortly before I was born he was killed on the job. My dad says Uncle Ed had one of the biggest funerals he’d ever seen, because for 513, they lost a member of their family.

The attacks on working people from Jefferson City are as personal to me as they are to you.

‘I WILL FIGHT FOR WORKING PEOPLE’
It is about time we had leadership who will fight for working people, not against them. That’s why I’m running for Governor. I’m running to put Jefferson City back on the side of working families.

In 2018, Labor won big. We rejected so-called “right-to-work” legislation at the ballot box and proved that our Labor community is a force to be reckoned with in Missouri. But to this day, many of our elected officials are supporting an anti-worker agenda that undermines Missouri’s working families, including my opponent in this year’s election, Governor Parson.

Union members have fought and won everything they’ve gotten at the bargaining table. As we celebrate Labor Day across Missouri, we’re reminded of those hard-fought gains that Organized Labor won, that benefit all workers regardless of whether they are a member of a union or not.

As your Governor, I’ll always have the back of the working men and women of Missouri.

Having my sisters and brothers from Organized Labor at my back gives me confidence that we can bring change to Missouri.

Thank you for what you do everyday to make Missouri strong.