Washington (PAI)— President Obama formally nominated AFL-CIO Associate General Counsel Nancy Schiffer and Kent Hirozawa, already a top staff person, to the National Labor Relations Board (NLRB) to replace Richard Griffin and Sharon Block, whose nominations he withdrew as part of a compromise deal between Senate Democrats and Republicans to end Republican filibusters that had held up approval of several important presidential nominations. Hirozawa is already at the NLRB as Griffin’s chief of staff.

Griffin and Block have been on the board for 18 months as temporary recess appointees because Republican senators invoked filibusters that required 60 votes for approval.

Nominations to the NLRB are important because the board’s rulings govern worker-management relations for 85 million workers, union and non-union, and mostly in the private sector. 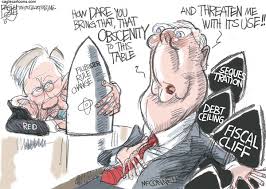 In return, Majority Leader Harry Reid, D-Nev., abandoned his push for a rules change to end all filibusters on all nominations. Reid suggested in public remarks that he was willing to use his threat again if he had to get around future GOP filibusters invoking the 60-vote rule.

Approval of Thomas Perez, a top Justice Department official whom Obama nominated to be the new Labor Secretary, was part of the deal, with the GOP dropping its opposition to him, too.

“Today’s deal, while not ideal, will allow for a fully confirmed NLRB for the first time in a decade, and that is a step forward,” Senate Labor Committee Chairman Tom Harkin, D-Iowa, said.  He set a hearing for July 23 for the last two nominees.

“It is my hope Republicans will make good on their word to give swift consideration to these nominees, and this could bring a new beginning for the board, so dedicated public servants at the agency can do their jobs without the constant political attacks and interference we have seen in recent years,” Harkin added.

The first nominee caught in the GOP logjam, Richard Cordray, the former Ohio attorney general named to head the new Consumer Finance Protection Bureau, sailed through, by a 71-29 vote to cut off the filibuster, far more than the 60 votes needed to halt such talkathons. The CFPB protects workers and consumers from further predations by financiers, such as those that caused the Great Recession.