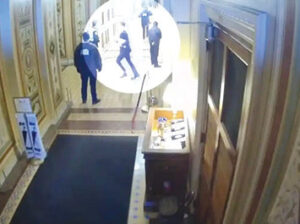 Democratic U.S. Senate candidate Lucas Kunce released a brutal campaign ad against incumbent Republican Sen. Josh Hawley (last week) to remind voters in Missouri that Hawley sprinted out of the besieged Capitol on Jan. 6th, 2021, after he objected to President Joe Biden’s landslide Electoral College victory over then-President Donald Trump in the 2020 election. Kunce is hoping to unseat Hawley in the 2023 contest.

As The Guardian pointed out … Kunce’s two-minute-plus spot quickly went viral. And it is easy to see why. In it, Kunce kneecaps Hawley as a “fraud and a coward” who chooses to “run away” from his duties.

“My name is Lucas Kunce. I’ve done a lot of running in my life – running to stay healthy, running to fight for my country, running to defend democracy. Oh, and by the way, that guy you’re looking at? That’s not me. That’s our current U.S. Senator, Josh Hawley. This guy, or maybe you’d better recognize him running for his life a few hours later. I swear, this coward’s always running from something. And now this is the guy who’s writing a book, telling every single one of us how to be a man,” Kunce says in reference to Hawley’s Manhood: The Masculine Virtues America Needs, which is slated to hit the shelves in May.

“Now this is me, Lucas Kunce, running for Senate. I wasn’t born with a silver spoon in my mouth, but I did have the support of my community, which made me who I am today. When things get tough, Missourians deserve a U.S. Senator who will stand up for them, not run away. That’s why I’m running to replace Josh Hawley, because we couldn’t be more different.” Kunce continues:

“Josh Hawley is a fraud and a coward. And by the time I’m done with him, the whole world’s going to know it,” Kunce concludes. “But keep on running, Josh. Keep on running.”