Home Opinions OPINION: ‘The Right has a greater appreciation of Labor’s Role than we...

Can Democrats figure out how to get unions back into the equation in 2020?

By THOMAS B. EDSALL

Even as many Democrats appear to accept Organized Labor’s decline, Republicans recognize the crucial importance of unions and are determined to gut them further. The conservative who may understand Labor’s ongoing significance best is Grover Norquist, president of Americans for Tax Reform.

In a 2017 essay for OZY.com, “Why Republicans (and Trump) May Still Win Big in 2020 — Despite ‘Everything’,” Norquist, a longtime anti-tax, anti-Labor activist, argued that continuing the right-wing’s effort to crush Labor’s power will be of vital importance to the outcome of the next election:

Trump’s unexpected victory in 2016 did not lay the groundwork for Republican political dominance. But the March 2011 signing of ACT 10, a dramatic reform of public sector labor laws, by Wisconsin’s Scott Walker certainly did. To understate it: If Act 10 is enacted in a dozen more states, the modern Democratic Party will cease to be a competitive power in American politics. It’s that big a deal.

Wisconsin Act 10 — the Wisconsin Budget Repair Bill — was a bill proposed by Scott Walker, the former Republican governor, and passed in 2011 by the Wisconsin Legislature. The act, as described by the liberal Center for American Progress, was brutal and laid waste to public-sector unions in Wisconsin:

Act 10 reduced collective bargaining rights for most state and municipal employees, including K-12 teachers. The law also weakened unions by mandating annual recertification elections and prohibiting paycheck deductions for dues collection. It also eliminated teachers’ and other public employees’ rights to bargain over hours and conditions of employment, as well as their ability to bargain over any compensation beyond base pay. Act 10 further restricted this base-pay bargaining by limiting increases to annual inflation.

RELENTLESS REPUBLICAN, ASSAULT ON UNIONS
Norquist’s claim about the effectiveness of Act 10 is spot on.

The relentless Republican assault on unions in the industrial belt states during the first half of this decade was an unquestionable success, politically speaking. It resulted in decreased Democratic turnout, a crucial drop in the bankrolling of Democratic candidates and, more subtly but no less significantly, a debilitating sense of powerlessness among union members.

Jon Shelton, a professor of history at the University of Wisconsin – Green Bay, who has studied the effects of Labor law changes in the state, wrote me by email:

Long story short, union membership has stabilized, but the consequences have been severe. One of the things that is hard to capture — beyond the economics — is how much public employees now feel disempowered.

The success of the concerted attacks by right-wing groups on the Labor Movement, especially on public employee unions, reflects more than the failure of Democrats at the national level to take steps to protect the rights of unions.

LACK OF PREPAREDNESS
First, the attacks exposed the union movement’s lack of preparedness for the battle, despite the clear warnings from conservative groups.

Second, they revealed the long-term neglect, by Democratic and liberal donors, of politics at the state and local level, where key labor laws are enacted.

Third, they showed the dangerously high level of public employee union dependence on favorable government treatment for survival. This dependency left these unions vulnerable when Republicans took over many state governments in the wave elections of 2010 and 2014.

There is some evidence that unions are regrouping. But they do so from a weakened position, with fewer members and diminished revenues.

Revived Democratic strength among union voters improves Democratic prospects in 2020, perhaps most especially for Joe Biden who, in his first campaign speech on April 29, affirmed his loyalty to the Labor Movement: “I make no apologies. I am a union man. Period.”

Nationally, total contributions from Labor political action committees rebounded slightly in 2018 from 2016 and 2014, but remained well below the 2010 level.

Public employee unions representing government workers — like AFSCME and the teachers’ unions — saw a similar drop: In 2018, their PACs gave $15.6 million, compared with $20.6 million adjusted for inflation in 2010.

(EDITOR’S NOTE: While these sums seem “huge,” let’s put them in perspective. According to Open Secrets, 2017/2018 PAC donations: 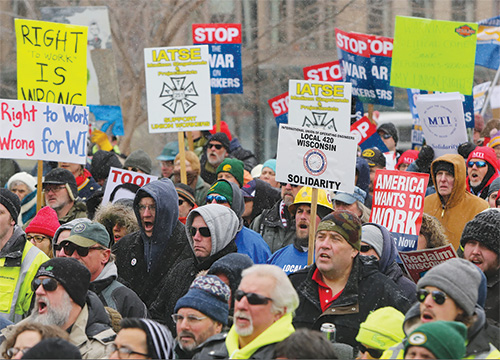 DAMAGE IS SUBSTANTIAL, DIFFICULT TO REVERSE
The damage inflicted on unions by enactment of “right-to-work” legislation is substantial and, in the case of the Wisconsin legislation, extremely difficult to reverse.

Three scholars have produced a detailed analysis of the political effects of “right-to-work” laws which have been enacted in 27 states.

In their February 2019 paper, “From the Bargaining Table to the Ballot Box: Political Effects of Right-to-Work Laws,” James Feigenbaum, an economist at Boston University, Alexander Hertel-Fernandez, a political scientist at Columbia, and Vanessa Williamson, a senior fellow at Brookings, compared adjoining counties in states with and without right-to-work laws.

“Right-to-work” laws, they write, “permit workers in a unionized business to opt out of paying dues to the union, even if those workers reap the benefits of collective bargaining and union representation.” These laws weaken “the organizational clout of labor unions.”

The authors found “strong causal evidence” for the demobilizing “effects of ‘right-to-work’ laws — examining state and federal elections from 1980 through 2016.” For Democrats, the demobilization after passage of such laws is devastating.

In 2016, the authors note, “Hillary Clinton lost Wisconsin, Michigan, and Pennsylvania by less than a percentage point each.”

UNIONS TAKING FINANCIAL BEATING
While unions are taking a financial beating, Blue Compass Strategies, a pro-labor consulting group, notes a surge in contributions in the first half of this decade to state-level conservative groups — many of them linked to the conservative State Policy Network — that back “right-to-work” and other laws that constrain unions.

One of the better things to happen for Democrats, Organized Labor and public employee unions in particular, is that Grover Norquist’s call for 10 states to follow Scott Walker’s lead in Wisconsin and enact a version of Act 10 has not materialized.

One of the key elements of Act 10 is that it uses the savings in reduced government employee pay and benefits to restructure the financing of state and local governments. As a result, repealing the Act would set in motion a chain reaction of politically damaging tax hikes.

Christian Schneider, a conservative columnist for the Milwaukee Journal Sentinel, delighted in telling readers that

Even if they went ahead with repealing the law, Democrats would have to deal with the effects of reversing the myriad proposals under Act 10’s umbrella. One of Walker’s primary initiatives was to require state and local employees to start paying towards their pension and health care benefits, which saved both levels of government money. This allowed him to reduce aid to local governments and school districts, knowing they would be able to replenish those funds by having to pay less for employee benefits.

If Democrats reinstate Wisconsin as a union utopia and teachers and local government employees once again start to collectively bargain, it will certainly increase the cost of providing services, and thus push property taxes significantly upward. That is, of course, unless the Democratic candidates want to move back to a system in which the state provides aid to local governments and school districts to subsidize these benefits. If that is the case, Democrats should be willing to provide examples of which state taxes they would raise to provide the billions of dollars it would take to restore this aid model.

Tony Evers, the newly elected Democratic governor of Wisconsin, included a series of pro-labor provisions in his first budget: a call for the repeal of “right-to-work” laws, a $15 minimum wage on government projects and restoration of the state prevailing wage law. He did not, however, include repeal of Act 10.

Marquette University Law School polled Wisconsin voters on Act 10 seven times between 2012 and 2018. In the first five, by small margins of two to seven points, pluralities averaging 48.5 percent preferred to keep the law on the books, compared with 43 percent for repeal. In the two most recent surveys, however, a plurality, 44.5 percent, supported repeal while 43 percent backed retention.

CENTRAL TO POLITICS
Hertel-Fernandez, the Columbia political scientist, wrote in the spring issue of the American Prospect:

In contrast to conservatives’ view of unions as being central to politics, mainstream Democrats have been much more reluctant to recognize just how important Labor has been to their party. Support for Labor rights is not unanimous among Democrats in the same way that opposition to unions is among Republicans.

there is no liberal version of state-level “right-to-work” laws that Democrats have consistently pursued over the years on a scale that matches conservative efforts to retrench labor power.

Given the key role of Organized Labor in winning approval of the liberal agenda, Hertel-Fernandez argued that “labor reform ought to be a ‘day one’ issue for Democrats.”

(Thomas B. Edsall teaches political journalism at Columbia University and writes a weekly column on strategic and demographic trends in American politics for the New York Times. Reprinted, edited and abridged from the New York Times.)