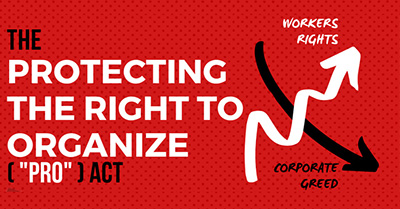 Washington (PAI) — Union leaders lauded the U.S. House’s 224-194 passage of the Protect The Right To Organize (PRO) Act, the most comprehensive pro-worker labor law reform in decades. But top aides to President Donald Trump have strongly recommended he veto it.

The legislation would make it easier to organize workers nationwide and would undo most of the business-erected barriers, roadblocks and outright labor law-breaking erected since the original National Labor Relations Act of 1935.

AFL-CIO President Richard Trumka called it “long overdue” because U.S. labor law has been so emasculated that it’s “no longer an effective means for working people to have our voices heard.” Instead, workers’ rights have “been trampled on for decades by union-busting consultants and anti-worker politicians.”

The legislation, HR2474, “will ensure a process for reaching a first contract once a union is recognized, prevent the misclassification of employees, protect the right to strike and so much else,” he added. “A happier, healthier and upwardly mobile workforce will help reverse the inequality of income, opportunity and power that is threatening our families, our communities and our democracy.

“This bill is for working people – and President Trump’s veto threat, though replete with inaccuracies and distortions, speaks volumes about who he is really fighting for….We will not rest until the PRO Act is the law of the land and the rights of workers are restored.”

Trump’s take was quite different, in the “statement of administration policy” from his Office of Management and Budget chief, Mick Mulvaney – who, as a notoriously right-wing Republican U.S. representative from South Carolina, had a lifetime AFL-CIO voting record of seven percent right. Mulvaney strongly recommended a Trump veto.

Senate Majority Leader Mitch McConnell, R-Ky., Trump’s lapdog, will pigeonhole HR2474, just as he has deep-sixed more than 400 other House-passed bills, including other pro-worker bills.

Communications Workers (CWA) President Chris Shelton: “The voices of America’s working people are finally being heard. Members of Congress are starting to understand the reason our economy has left so many families behind is that corporations bent labor law to their will. The PRO Act restores balance to our system by putting power in the hands of working people. It will make it much easier for workers to join a union, and crack down on the dirty tricks that companies use to make workers afraid of taking collective action to improve their lives.”

• Teamsters President Jim Hoffa: “The House agreed to restore fairness to the economy at a time when income inequality has stifled the ability of far too many hardworking Americans to earn a decent wage that allows them to support their families.
“The PRO Act will strengthen the NLRA so workers seeking to organize a union and negotiate higher wages and better benefits will be protected. Workers deserve a safe workplace, the ability to stand together and negotiate better working conditions, and to live a middle-class lifestyle. Lawmakers have realized what happens when workers are abandoned by their elected officials.”

• Laborers President Terry O’Sullivan wrote to lawmakers: “HR2474 expands remedies, punishes employers’ violations of workers’ rights and strengthen workers’ right to organize and bargain for better wages and working conditions...It will prevent employers from misclassifying workers as ‘independent contractors,’” among other benefits. It will also protect the undocumented, he said.
“Most importantly, it will push back on so-called ‘right-to-work’ laws harming unions and our members.”

• The Office and Professional Employees, in a convention statement last year: “Facing at most a slap on the wrist, which often comes years after the NLRA violation, employers bust unions, defeat organizing drives, force wages down and drastically cut or eliminate benefits. The resulting anti-union climate has impacted all working people in the United States. The legally guaranteed right of American workers to organize and bargain collectively must be restored through labor law reform.”

• The Postal Workers said in a tweet: “Good labor laws do more than just right the wrongs waged against unions & their members. Good labor laws help ensure people are safe at work & have a shot at decent wages, health care, & a secure retirement.”

• Retail, Wholesale and Department Store Union President Stuart Appelbaum said stronger labor laws would protect workers when chains close stores, as Macy’s did on Feb. 5.
“Unions can ensure workers have protections in place to be able to survive frequent store closures and mass layoffs, as well as improve working conditions for warehouse workers in our shifting retail landscape,” Appelbaum said. “Union contracts can ensure workers are treated with dignity and respect when stores close and layoffs happen. Without a union contract, workers have no recourse, and when companies close stores or fold entirely, they’re too often left with nowhere to turn.”

• National Nurses United Executive Director Bonnie Castillo, RN, recently wrote in The Hill that the PRO Act “would make it easier for workers to reach first contract agreements — critical because our union contracts enshrine our workplace protections. It would also close federal loopholes that allow employers to misclassify workers – avoiding the resulting benefits we would otherwise deserve – and allow unions to collect dues for the representation they provide.
“And with the passage of this bill,” Castillo said, “employers who violate our workers’ rights would feel repercussions.”