Home Labor News From Our Region OPINION: Unions must fight if they are to survive

Guys, we’ve got to get more involved with what’s going on the political arena. It’s the same thing as keeping a pipe wrench in your tool box. We took a bad hit in 2014 that I never thought would happen. We only lost one spot, but that was the governorship.

And now, Gov. Bruce Rauner is doing everything he can to destroy Labor. If you see what’s happening across this country, it’s the same thing. It’s Republicans. Republican governors, Republican House, Republican Senate. They are totally against Organized Labor, and that’s us. They are trying to destroy us. We can’t let that happen.

The reason we’re here tonight is that C.J. Baricevic is running for Congress in the 12th Congressional District. Back in October, C.J. presented himself to the executive board and delegates of the Illinois Pipe Trades. He hadn’t gotten out of the parking lot before the delegates endorsed C.J. 110 percent for Congress.

We thought it was too early to do it before, so we’re formally endorsing him tonight. C.J., you’ve got our support, 110 percent. He’s going to be our next congressman!

Not only are we formally endorsing C.J., but we need to get to work. You’ll hear politicians tell you to get out and vote, that we need every vote we can get. They are right!

Electing Rauner was a disaster, and we can’t let that happen again. If we lose this thing – with PLAs (Project Labor Agreements), with prevailing wage, with collective bargaining – we’re done! Our union halls are done. I’m not trying to scare you. I’m telling you facts. 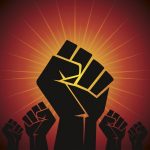 I just can’t stress how important it is that we get people involved. In a recent Wisconsin election, Democrats lost 15 seats by 100 votes or less. Then the unions did a poll of their members and found that about 300 members in each of those districts did not vote.

Look at Wisconsin right now. We can’t let that happen to Illinois. You took an oath and a pledge when you came into your union hall, and so did I, to protect your jurisdiction. We can’t let this happen in our lifetime, and not on our watch can we let the Republican Party take us over like they’re doing all across this country.

The first thing they do is go after the collective bargaining agreement. They go after work comp., they go after prevailing wage. That’s us – all of those.

They are trying to destroy us. They hate you. We did the Pledge of Allegiance tonight, and the last five words in there are “liberty and justice for all.” What happened to justice for the unions? The Republicans hate us.

They won’t know about all that if we let them down, and I feel like we are. We’ve got to do something brothers, I mean it. It’s serious.

Again, I’m not trying to scare you, it’s the bottom line.

This thing is just terrible – Rauner and the Koch brothers and all their money. We cannot compete with that. There’s no level playing field there. They’re going to outspend us a hundred to one, a million to one, you know.

But where we can beat them is with boots on the street. Talk to your friends! Talk to your neighbors! Get your families to vote!

It’s pretty simple, I think, but we didn’t do that in ’14. People were lazy. And the younger guys – you guys are the ones who it’s going to hurt the most. You guys have got to get motivated, and you’ve got to get on board. And we’ve got to vote-in every Democratic candidate out there, or at least every union-endorsed candidate, for sure.

Rauner wants to raise the minimum wage up to $10 an hour – over seven years. So he wants to give them another 25 cents an hour, for seven years! What do you think he thinks about us making $38 an hour? The guy hates you. I’m going to tell you, he hates you.

These are serious times, guys. We’re only going to lose this one time. Once you lose it, it’s gone. It ain’t coming back.

You’ll hear guys say, “There’s no difference between a Democrat and Republican.” Yes, there is!

Mike Frerichs is a prime example of that. He won by one vote per precinct in the state.

Guys, it’s important. When you come into these union halls as a business manager, your job is to make the local better than it was before it was given to you.

I hope to God we do that, because it’s serious times, brother. It’s the Alamo – and we ain’t Santa Ana.