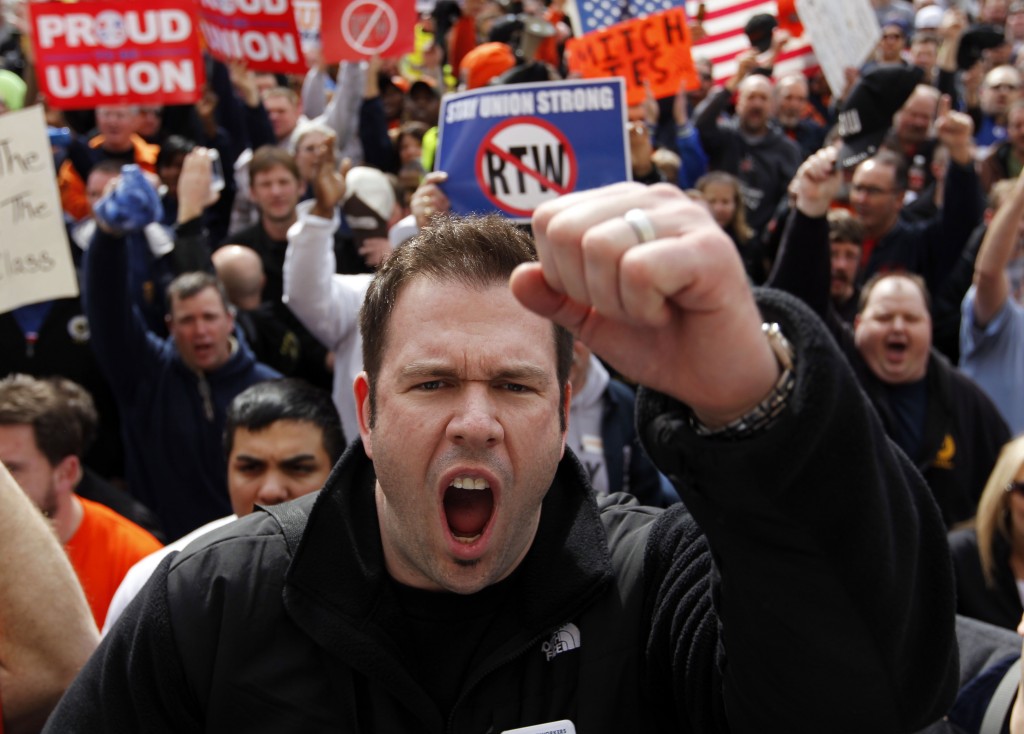 Last week the Missouri Senate passed right-to-work legislation. The next day, it passed in the House.

Senate Democrats tried to stop it, filibustering the anti-worker bill for eight hours before Senate Republicans forced a vote with a procedural move designed to cut-off debate.

Like Michigan in 2013 and Wisconsin last year, Missouri is on the brink of becoming a right-to-work state.

It won’t happen this year – hopefully. Gov. Jay Nixon, a Democrat, has said repeatedly that he will veto any right-to-work legislation that lands on his desk, and worker-friendly Republicans that sided with Democrats to try to stop this year’s legislation, denied extremists the votes needed for a veto-override in September.

But it may not matter.

The conservative (read corporate) anti-worker forces have won a symbolic victory that may well play to their favor in next year’s race for Missouri governor, when they can confidently tell supporters that the only thing standing between them and a successful right-to-work bill is the Democrat in the governor’s mansion.

FOR THE PEOPLE?
Sen. Dan Brown (R-Rolla) sponsored the legislation and made an impassioned plea for what he knew – or should have known – to be a lie.

"This is for the people of Missouri," said Brown – who, like House sponsor Eric Burlison (R-Springfield) has ties to the corporate-funded American Legislative Exchange Council (ALEC) – "This is an economic development bill for all points of Missouri. I don't care what anyone says."

“Economic development,” for right-to-work supporters, works like this: Right-to-work laws allow non-members to enjoy the fruits of union negotiated wages and benefits without having to pay any of the cost of representing employees in collective bargaining and providing the services that are given to union members. They get to enjoy those benefits and services; they just don’t have to pay for them.

The result is weaker unions and lower wages, for union and non-union workers alike. Employers don’t have to pay as much so, theoretically, they can hire more workers.

Workers are forced to take the low-wage jobs – sometimes two or three jobs – to pay their bills and feed their families. They don’t complain about their wages or working conditions for fear of losing what little they have.

Sen. Brown says this is “for the people,” but right-to-work laws are not designed to do anything to improve the lot of the average worker.

LESS OF EVERYTHING, EXCEPT RISK
Some may argue that having any job is better than not having a job – no matter how low the wage or unsafe the working conditions. Let’s examine that.

Missouri borders eight other states, six of which are RTW states: Iowa, Nebraska, Kansas, Oklahoma, Arkansas, and Tennessee. All six have lower than average union membership, lower wages and higher rates of death on the job.

All six of Missouri’s RTW border states have higher than average rates of on-the-job deaths. Without union protection for whistleblowers, workers are more likely than not to look the other way. Oklahoma and Iowa’s death rates are nearly double the national average

GOVERNMENT OF THE CORPORATION FOR THE CORPORATION
Americans for Prosperity, the conservative political group started and funded by Charles and David Koch, weighed-in last week after the Missouri Senate passed right-to-work.

“Today is a historic and exciting day in the Show Me State. Missouri is one step closer to joining 25 other states across the nation in giving its workers more freedoms.”

“It's great to see Missouri join many neighboring states,” Werner continued, adding that Americans for Prosperity Missouri will continue to advocate the passage of right-to-work and encourage Governor Nixon to sign the legislation.

AFP, a group with a moniker as disingenuous as right-to-work, has been on a political, anti-worker, anti-working class juggernaut since its creation in 2004:

AFP played a key role in the 2010 election of a Republican majority in the U.S. House of Representatives, and lead all outside groups, in spending on political television advertising in the 2014 mid-term election cycle.

Let’s be clear whom it is right-to-work senators and representatives work for. They don’t work for you. They don’t represent the working people of Missouri. They work for and with the blessing of AFP, ALEC and other corporate-funded conservative groups.

You don’t have enough money to earn their favor. And if right-to-work becomes law, you likely never will.

STAND AND FIGHT!
Here’s the hard truth: We did this to ourselves.

Last November conservative Republicans were given all the control they needed as voters handed them control of both houses of the U.S. Congress and state legislatures across the country. Missouri was no different.

Here’s how to tell if you have at least part of the blame:

There is no room or time left for excuses, pie-in-the-sky planning, petty arguments or bruised egos.

The fight is now. The opposition is organized. They have spent the last half of the last century preparing for this moment.

If you are unwilling to fight for that, to take a risk, to stand up and be counted, then there is nothing your union or anyone else can do to help you.