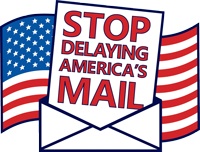 This Friday, Nov. 14, Postal Workers across the country will come together for a National Day of Action to tell Postmaster General Patrick Donahoe and the USPS Board of Governors: “Stop delaying America’s mail!”

“The Postal Service is set to make severe cuts in mail delivery service that, if implemented, would cause hardships for customers, drive away business, and cause incalculable harm to its reputation,” NALC President Fredric Rolando said.

This January, USPS plans to close or consolidate operations at 82 mail processing and distribution centers throughout the country. Such a move would practically eliminate overnight mail delivery—even from one address to another within the same city or town.

“This plan would sacrifice service while failing to address the real causes of the Postal Service’s financial problems,” Rolando said.

The agency’s reported “losses” actually are the result of a 2006 congressional mandate that forces it to set aside each year billions of dollars—money that’s raised solely by the sale of stamps and postal products, not taxes—to pre-fund the health benefits of future retirees. No other government agency or private enterprise is required to pre-fund such benefits at all.

In 2014, the USPS has earned more than $1 billion in profit from operations.

Rolando is encouraging active and retired letter carriers to work with and support their sisters and brothers in the APWU, NPMHU and NRLCA on Nov. 14, the date of the Board of Governors’ final public meeting of 2014.

Postal workers all across America will use this day of action to send a message to the Board of Governors and Congress that these proposed service cuts are unwise and unnecessary.

In St. Louis, the rally will begin at 1 p.m. in front of the Main Post Office in Downtown St. Louis.

St. Louis area Postal Workers, now is the time to step up and help protect your job. If the USPS is allowed to make these changes, your job could be in danger. This will lead to massive schedules changes and reassignments for employees