Callaway Nuclear Plant, Fulton, Mo – In an effort to “set an example” for contract negotiations with its three major unions during the next few years, Ameren Missouri is playing hard ball with its new security officers’ union and in doing so is facing a potential strike by nuclear security officers at the plant early next year.

In an exclusive interview with the Labor Tribune, Russ Langland, president of United Government Security Officers of America Local 11 (UGSOA), explained how the frustration of the 91 guards who provide security for the nuclear power plant are so exasperated with efforts by Ameren to neuter their contract as a prelude to negotiations with their other unions, that the membership is now seriously considering strike action early next year if Ameren continues to refuse to negotiate a reasonable first renewal contract.

UGSOA is a relatively small international union. Local 11 was formed at the Callaway plant four years ago. Its first union contract expired July 1, 2015 and they are working under an extension.

Major unions at the nuclear plant are Operating Engineers Local 148, and IBEW Locals 1439 and 1455. The security officers’ union, Local 11, is by far the smallest, and newest, union at the plant. In addition, most subcontractors who perform work on site have labor agreements with various building trades unions.

Negotiations have been under way since May with a dozen negotiating sessions lasting 8-10 hours each producing a tentative agreement that was twice rejected by the membership, the last time by an 87.5 percent majority, signaling the members complete discontent with the company’s proposals to gut their contract and ignore some real needs of the union’s members. 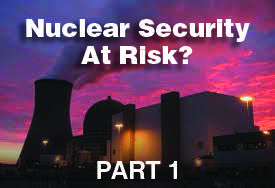 “After our members rejected the proposed agreement twice — the company’s last, best and final offer was the one rejected with the 87.5% vote — the plant’s Human Resources manager told us, ‘If you think you’re going to go back to the bargaining table and get a better contract you better be ready to hit the bricks,’” Langland said.

“The strike potential is now very real,” Langland stressed. The issue of how and when is already under discussion within the union.

To get ready, the union has:

(NEXT WEEK: Part 2 - Why the union feels Ameren is not being fair and is really forcing the union to consider strike action.)