“This isn’t a ‘make work’ temporary effort to get minorities and women hopping from one job site to another to meet artificial quotas,” Aboussie said.

“BUD is a program to give men and women a career in construction that want one, but haven’t had the opportunity before

Aboussie said the Building Trades Council also is working closely with community groups to find ways to stop community in-fighting — such as between St. Louis City and St. Louis County and its municipalities — and start working together as a region, citing:

• This year’s unified effort to bring the next generation Boeing aircraft, the 777X to St. Louis.

“Everyone was together, and in a short time we put together one helluva package,” Aboussie said. “While we were not successful, that doesn’t mean we stop trying.”

• The construction of the new Busch Stadium, while the old stadium was still in use.

• Rebuilding Highway 40 and countless other major construction projects here that came in on time and on budget.

“The St. Louis Building Trades Council stands ready to be a partner in whatever makes sense,” Aboussie said. “And we’re doing our part. We’re training the best-qualified, skilled workforce in America right here in St. Louis.

“We’re working with out contractors, with buyers of construction, with everyone in our industry to make agreements that make sense.”

In addition to Aboussie, PRIDE also honored the following:

Cardinals President Bill DeWitt, was the organizations senior vice president of business development in 2006, during the design and construction phases of the new stadium, and worked closely 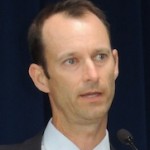 with the building and construction trades to keep the project on schedule.

During construction of the new ballpark village, DeWitt said he had a bird’s eye view of the working being done from the window of his office.

Watching the iron workers, he said, “made me appreciate how much those men and women do, and the risks they take every day. We so appreciate that they take those risks for us. It moves our region forward.”

• Express Scripts, which, recently added a new 220,000-square-foot building and expanded its Technology and Innovation Center as part of a $56 million investment in its north St. Louis County campus, received the PRIDE Industry Impact Award.

Marty Hoffman, vice president of corporate real estate, accepted the award on behalf of the company.

PRIDE co-founder Dick Mantia, and the man chiefly credited with establishing labor-management peace in the local construction industry, died earlier this year after a brief battle with leukemia. He was 82.