Home Labor News From Our Region SEIU Local 1 janitors take arrest as they fight for $15 and... 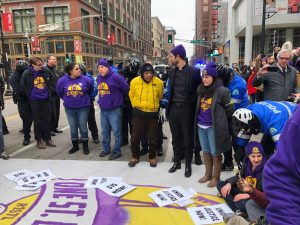 Downtown St. Louis – Some 50 Service Employees International Union Local 1 janitors and their supporters braved cold temperatures and arrest Monday in a rally, march and act of civil disobedience as they continue fighting for a fair contract. 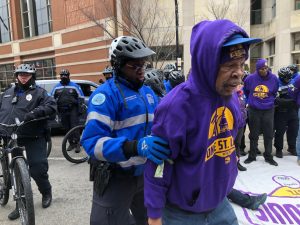 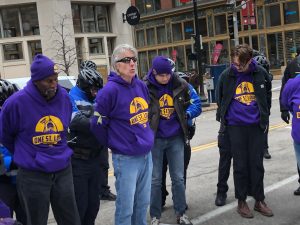 blocked the street until they were arrested by St. Louis police – demonstrating they are prepared to do whatever it takes to secure a minimum $15 wage and good union jobs for every working family to make the region more equitable across racial lines.

The janitors, who clean some of the most notable buildings in the region, including US Bank Plaza, Express Scripts, Wells 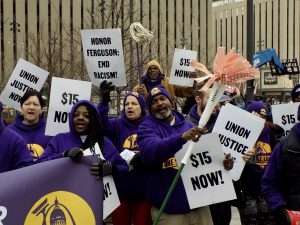 Fargo and County facilities are struggling to support their families on wages as low as $10 an hour.

The region’s racial income gap has grown by more than 10 percent since 2010, with black families three times more likely to live in poverty than white. 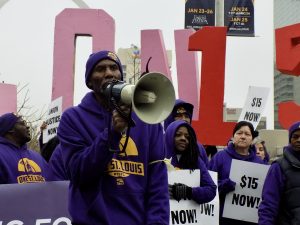 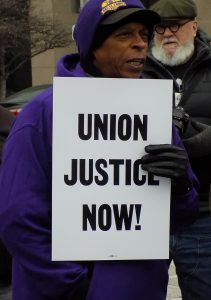 Major institutions, like Treasurer Jones’ office, BJC Healthcare and Washington University in St. Louis put thousands of direct employees on the path to a $15 wage.

It’s time the same is done for janitors, so they can strengthen their families and communities.

Look for full coverage in the Feb. 6 print edition of the Labor Tribune.