An interfaith Labor Prayer Service, led by the Rev. Dr. Martin Rafanan of the Evangelical Lutheran Church in America, was held outside the Shrine prior to the mass.

About 200 union members and their families turned out for the somber program. 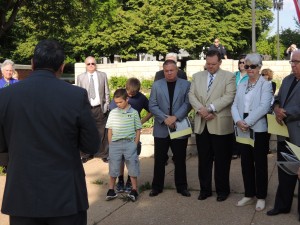 The names of members who died on the job or from work-related illness or injury during 2014-2015 were recognized with a special ceremony before the mass outside the church.

• Albert L. Crump – United Steelworkers Local 9014. Brother Krump, 58, was killed on Sept. 6, 2014 when he was pinned between a scrap table and a railing at the Clayton Dubilier & Rice portfolio company’s facility in Bridgeton, MO. Brother Crump was a husband, father and grandfather.

• Justin D. Jokerst – Operating Engineers Local 513. Brother Jokerst, 31, was killed Jan. 12 in Edwardsville, IL, in an accident involving a crane. Brother Jokerst was a husband and father; he and his wife, Kaci, were expecting twins.

• Stewart “Bill” Morton – CWA Local 6300. Brother Morton, an AT&T technician, suffered a fatal fall while performing telecommunications aerial work on Nov. 29, 2014. Brother Morton was a husband, father and grandfather, a volunteer with the Missouri Department of Conservation and a Boy Scout leader for many years.

AN OFFERING FOR WORKERS

This year’s mass included a special recognition of workers’ lives, skills and craftsmanship, with a presentation and display at the altar of workers’ tools of their trades, presided over by Ed Finkelstein, publisher of the Labor Tribune. 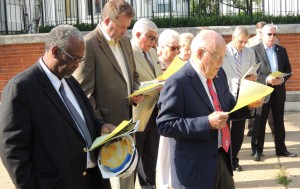 Unions have championed and fought for worker safety throughout their history, influencing state and federal regulations and investing in health and safety education and technical expertise to protect workers’ health and often save lives.

As union members, we can never forget what is at stake as we fight for workers’ rights