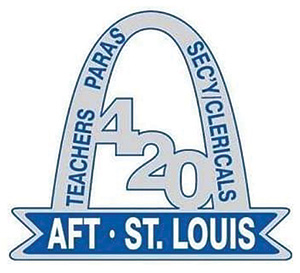 After eight months of negotiations, members of AFT St. Louis Local 420 have voted overwhelmingly to approve a memorandum of understanding with the school district, following the recommendation of the union’s executive board and the Local 420 negotiating committee.

The agreement was ratified by the union’s General Membership 92.25 percent to 7.75 percent and is scheduled to be approved by the St. Louis Board of Education.

Local 420, an affiliate of the American Federation of Teachers, represents more than 2,000 teachers and school support personnel in the City of St. Louis.

“We are pleased that our members approved the offer,” said Ray Cummings, interim president of Local 420. “They have been heroic throughout this pandemic. We deserve the respect shown by the District in this agreement.”

Cummings said the agreement includes a well-deserved $1,900 bonus, as well as raises over the next three years.

In perhaps the biggest news, Cummings said, the agreement includes a plan to raise the salaries of the district’s lowest-paid employees to $15-an-hour.

“We are extremely proud of our union and the district moving forward with a living wage for our lowest-paid hourly workers,” Cummings said. “We can announce one more victory in the ‘Fight for 15.’ All workers deserve a living wage, benefits and a union.”

Local 420 Negotiations Committee Chair Steve Hill said, “We thank the membership for this vote of confidence I have nothing but praise for our negotiation committee and am pleased we could find a middle ground with St. Louis Public Schools and have a fair contract to offer.”

In an historic first, due to the pandemic, the agreement was ratified remotely through the vendor Ballot Point, which was recommended by AFT National.