Low-wage fast food jobs come at a high cost to taxpayers, who subsidize underpaid fast food workers through public assistance programs to the tune of  $7 billion a year, according to a national study released last month by economists at the University of California at Berkeley and the University of Illinois.

A coalition of labor and community action groups that helped organize a series of one-day fast-food strikes in recent months sponsored a hearing at St. Louis City Hall last week to publicize the study results.

“We are here to help create a climate where the denial of workers’ rights will not be tolerated,” Joan Suarez, co-chair of the St. Louis Jobs with Justice Workers’ Rights Board, said as she convened the hearing Oct 28.

Fast food workers in St. Louis and across the country have staged a series of one-day strikes in recent months demanding $15 an hour and the right to form a union without retaliation.

The reports, released in mid-October – titled Fast Food, Poverty Wages: The Public Cost of Low-Wage Jobs in the Fast-Food Industry and Super-Sizing Public Costs: How Low Wages at Top Fast Food Chains Leave Taxpayers Footing the Bill – argue that low-wages in the fast-food industry costs U.S. taxpayers nearly $7 billion dollars annually. That comes to $146 million a year in Missouri and $368 million a year in Illinois.

‘SHOCKING, BUT NOT SURPRISING’ 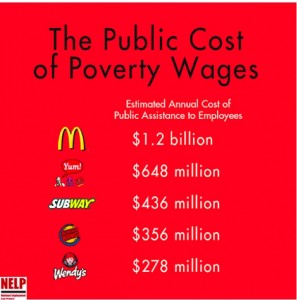 Allan MacNeill, an associate professor at Webster University, said 49 percent of fast food workers in Missouri rely on public assistance just to get by.

“The findings are shocking, but not surprising,” MacNeill told state representatives, local officials and members of the clergy at the meeting.

“It’s not surprising because people often wonder – ‘How do people live on the money they earn in the fast-food industry?’ Well, now we know the answer. They don’t. They have to rely on other sources including public assistance.”

The result, MacNeill said, is a giant public subsidy to some of the country’s most profitable corporations.

According to Super-Sizing Public Costs the “10 largest fast-food corporations alone made more than $7.4 billion in profits in 2012”

MacNeill said the estimated cost to taxpayers is actually conservative, because the studies included only five of the largest federal public assistance programs, excluding other federal and state programs.

“The estimates are very conservative,” MacNeill said. “In fact, they undercount the actual public cost.”

The STL Can’t Survive on 7.35 campaign has been actively protesting for higher wages and the right to form a union since May. In August, fast-food workers in 60 cities across the country went on strike, calling for higher wages, so they don’t have to rely on public assistance programs to get by.

“Taxpayers are directly subsidizing the profits of fast-food giants like McDonald’s, Wendy’s and Burger King,” the Rev. Martin Rafanan community director of the STL Can’t Survive on $7.35 campaign said.

McLemore – who is six months pregnant with her second child – works 30-40 hours a week, yet still qualifies for food stamps and Medicaid.

Alisha Snider, a Wendy’s employee, earning $7.50 an hour, said, “I rely on food stamps to put food on the table.

“I work hard every day and I don’t make enough to feed my family and pay all my bills. I receive public assistance not because I want to but because I have to make sure my children eat. Wendy’s should pay us more, so we don’t have to worry about where our next meal will come from.”

Holly Roe, a case worker at the Department of Family Services, said, “too many of my clients are low-wage workers at fast food restaurants.”

Roe, who is also a member of the Missouri State Workers’ Union-Communication Workers’ Union of America (MSWU-CWA) Local 6355, said, fast food workers are “disregarded and disrespected” at work, which she calls, “economic bullying.”

“Can we really expect fast food companies who have no concern for their employees to be concerned about the customers,” Roe asked?

Don Giljum, retired business manager of Operating Engineers Local 148 and a member of the Workers’ Rights Board, said “Fast-food workers are taking a stand for all of us. We have to stand with them.”