Home Opinions Tell the U.S. Senate: We must strengthen unions by passing the PRO... 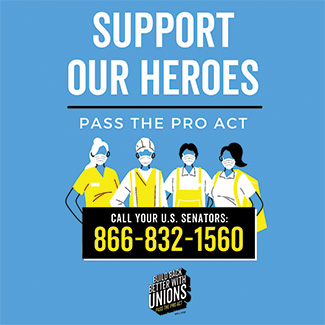 This legislation is urgently needed.

Amazon warehouse workers in Alabama, for example, recently faced efforts by the company’s management to block organizing efforts and intimidate workers into voting against unionizing.

(EDITOR’S NOTE: The company’s misinformation and fear campaign worked. Stuart Appelbaum, president of the Retail, Wholesale and Department Store Union said workers voted not to join the union over fears – instilled by Amazon management – that the company was watching them and that they would lose their jobs if they voted for the union.)

Amazon’s actions reflect a wide range of legal and illegal tactics that U.S. companies routinely use to suppress the rights of their workers to form unions and collectively bargain with their employers.

The Protecting the Right to Organize (PRO) Act would close loopholes in current law that allow employers to get away with these efforts to undermine working people, and would restore crucial rights established 85 years ago under the National Labor Relations Act.

Here are some of key elements of the PRO Act:

UNIONS ARE CRITICAL
Unions are critical to increasing wages and addressing growing income inequality. The Economic Policy Institute has produced detailed analysis documenting that as union membership has declined, the chronic income inequality in our country has continued to grow.

We must address this inequality. The PRO Act would reverse years of attacks on unions and restore fairness to the economy by strengthening the federal laws that protect workers’ right to join a union and bargain for higher wages and better benefits.

The PRO Act will restore workers’ ability to organize by protecting their right to negotiate for better wages, benefits, and fairness on the job. It will also promote greater racial economic justice because unions and collective bargaining help shrink the Black–white wage gap.