Home Labor News From Our Region The unseen role of Labor in trying to make the Boeing deal... 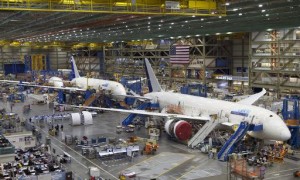 (EDITOR’S NOTE: All to often the role Labor plays in a variety of areas helping to create and/or improve jobs for all Missourians and stimulate the state’s economy go unnoticed, or worse, taken for granted. These two stories appeared in recent issues of the Missouri Times, a political newspaper based out of Jefferson City.  They are an insiders view, and untold story, of the important, if not crucial, role Labor played in getting Missouri into the game in trying to woo a new Boeing production facility, and its thousands of high paying jobs, to Missouri. The paper prints every week during the legislative session, and every other week during the interim. It also is found online: TheMissouriTimes.com. For anyone interested in politics, it’s a MUST read.)

“For the first time, we all worked together for one common goal, and when we don’t keep moving the goal line we can get things accomplished,” Bob Soutier, president of the Greater St. Louis Labor Council, AFL-CIO says. “I commend the legislature for doing the right thing on this one.”

The announcement was an added bonus from perhaps Missouri’s biggest advantage in the bidding war for Boeing — a union workforce with training and experience working in aerospace that was willing to work with Boeing.

With barely one week to work on a deal worth more than a billion (dollars) across 20 years, Democrat lawmakers got help from the unions in quieting their own concerns and disseminating information about the deal to their fellow elected officials.

“Due the complexity of the project and the time to get it done, it took a handful of men and women to get info to each and every one of us and I applaud the men and women who worked together to accomplish that goal,” Rep. Keith English (D-Florissant) said.

“Jeff Aboussie (executive secretary-treasurer of the St. Louis Building and Construction Trades Council), Bob Soutier, Mike Louis (secretary-treasurer of the Missouri AFL-CIO) and IBEW Local 1 President Tom George all took leading roles in getting to us, helping us get the information and helping us work with the other parties involved to move this across the finish line in a timely and responsible way.”

With labor unions working together to craft a larger deal and the St. Louis chapter of the International Association of Machinists preparing themselves to more openly consider Boeing’s benefits package that was rejected in Seattle, labor leaders were positioned as fundamental to attracting Boeing.

GETTING INVOLVED FOR MISSOURI’S SAKE

Union leaders said they saw the chance to get seriously involved in the passage of the deal as one more way to attract Boeing.

“This wasn’t a response to Right-to-Work, this is what we’ve always sought to do,” Louis said. “This was us, as leaders, doing the best we can do for the St. Louis community. We have the workforce and we have the desire to do this job. So let’s show Boeing just how serious we are.”

Aboussie said the 24-hour agreement was just one way Missouri could “highlight its strengths,” in the process.

“With our history in St. Louis with McDonnell Douglas and Boeing as well as some leading auto manufacturers, we really felt that a well-trained, well-paid workforce with a long history with this company was one of the best feet to put forward,” Aboussie said.

(EDITOR'S NOTE: Despite Missouri's best efforts, but 777X will not be coming to the Show Me state. The Seattle Machinists, Lodge 751, on Jan. 4, narrowly approved an eight-year contract that will keep production of the new 777X jet airliner in Washington state in exchange for cuts in benefits. As a result, Boeing will stop seeking alternate sites for production. Lodge 751 said in a statement that members approved the controversial contract by 51 percent.)

Jefferson City — As Gov. Jay Nixon and legislative leaders began crafting an incentive deal during the (recent) special session…, plenty of lawmakers wanted to use the opportunity to talk about labor issues.

More specifically, a contingent of House Republicans were prepared to attach right-to-work (for less) language to the deal, forcing the issue onto Nixon’s desk and potentially igniting a public debate ahead of the general session.

One lawmaker, who supported right-to-work (for less), put it more bluntly.

“That fight” would likely come in the form of a ballot initiative, so long as Nixon — who has promised to veto RTW (for less) — is governor and Republicans lack enough votes in the House for an override.  Legislative hurdles haven’t stopped some, like Rep. Eric Burlison (R-Springfield) from filing RTW (for less) legislation.

But if (the recent) Boeing deal was any indication; organized labor in Missouri does not intend to go down without a fight. Even as RTW (for less) supporters… began angling in public to paint Missouri’s non-right-to-work status as a major pitfall, labor moved quickly to insert themselves into an incentive deal with Boeing, and countered with an offer to highlight the benefit of an organized labor workforce in the state.

Mike Louis, secretary-treasurer of the Missouri AFL-CIO, said he didn’t consider RTW (for less) a serious threat on the Boeing package, but is always concerned about a ballot initiative or legislative language aimed at “hurting labor unions.”

For Louis and fellow labor members, slowing down a potential coalition on RTW (for less) during special session may simply have been an added bonus to the political capital earned during their time pushing for Boeing.