“It shows a complete disregard for what workers like me need to get by in St Louis,” said Holmes, a member of St. Louis’s Fight for $15 chapter – Show Me $15. “I’m still in the fight for a living wage in the city of St. Louis, which is $15 an hour. Eleven dollars in 2018 isn’t enough for me; it won’t get me out of the boarding house I currently live in, and it’s not even close to what the work I do at McDonald’s is worth. I’m fighting for $15 and union rights now, by any means necessary.”

Circuit Judge Steven Ohmer struck down the minimum wage law Oct. 14 just hours before it was set to go into effect, saying it conflicted with the state’s minimum wage law. The city said it would appeal to a higher court.

A consortium of business groups sued last month an attempt to stop the city from instituting an $11 minimum wage by 2018. The first increase was set to take place last week and would have raised the city’s minimum wage to $8.25 an hour – 60 cents above the state’s minimum wage.

The suit, filed in St. Louis Circuit Court by lawyer Jane Dueker, alleged the city’s increase conflicted with state law. Ohmer agreed, saying the city’s law raising the wage was “unenforceable and in conflict” with current state law that sets the minimum wage at $7.65. 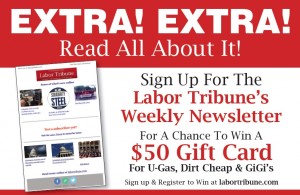 An appellate court could reverse the decision, but that could take months.

The city argued that the increase was proper, and also cited social issues from the Ferguson unrest as a reason for implementation.

Ohmer said it was not the court’s duty to consider the social or economic effect of the law.

Mayor Francis Slay, a vocal supporter of the law who pressed aldermen to pass it, said the city would appeal.

“We will appeal the ruling with the hope that higher courts will affirm the city’s authority to adopt its own minimum wage,” Slay said via Twitter.

St. Louis City Counselor Winston Calvert, who represents Slay and the city, knew going in that the issue would ultimately be resolved by the appellate courts.

Richard von Glahn, of Missouri Jobs with Justice, expressed disappointment with the judge’s ruling, but thanked St. Louis city leaders for taking on the fight.

Von Glahn said the ruling will prevent “more than 30,000 families from receiving a much-needed and well-earned raise” and “only benefits the wealthiest few who pushed legal action, while making it harder for parents to put food on the table for their children.

“The increase passed by the Board of Aldermen in St. Louis reflects a growing consensus that the crisis of poverty wages needs to be addressed at every level in our economy and we thank the City’s elected officials for their continued leadership on this.  We expect this lower court ruling will be appealed while we all continue to work to have the consensus of voters to increase the minimum wage reflected by our elected officials at the local, state and federal levels,” von Glahn concluded.

Show Me 15 held a Wage Board Oct. 8 at which State Representative Mike Butler (D-St. Louis) said he will introduce legislation for a $15 minimum wage in next year’s legislative session.