(Editor’s Note: Progress Missouri has put together an extensive report, “Exposed: ALEC’s Influence In Missouri,” that looks at who is really writing our laws in the Show-Me State. Hint: It’s not always the legislators who were elected to represent us. Following is a look at some of the highlights of the report. To read the full report, visit www.progressmissouri.org.)

Corporations, working through the American Legislative Exchange Council (ALEC), hand Missouri legislators wish lists in the form of “model” legislation that often directly benefit their bottom line at the expense of Missouri families.

Behind closed doors, numerous ALEC model bills are crafted by corporations, for corporations.

Elected officials who are members of ALEC then bring their model legislation back to Missouri, where they claim them as their own ideas and important public policy innovations without disclosing that corporations crafted and pre-voted on the bills at closed-door meetings with legislators who are part of ALEC. 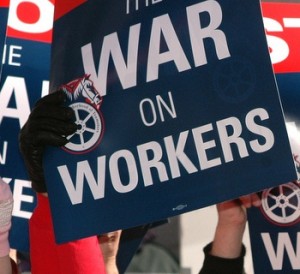 • ALEC is a corporate bill mill exerting extraordinary and secretive influence in the Missouri legislature and in other states.

ALEC provides legislators with a means to appear highly active in the legislative process by secretly abdicating their job drafting legislation to corporate special interests.

“It is funded and dominated by free-market and corporate interests,” writes the Kansas City Star, “who work with like-minded legislators to shield corporations from legal action, limit the rights of workers, disenfranchise voters, radically privatize the public education system, hinder the ability of government to regulate and curb polluters, and further skew our democracy in the favor of corporations and their political allies.”

• More than 60 legislators in Missouri have been identified as having ties to ALEC.

As noted by the Center for Media and Democracy’s ALEC Exposed project, the American Legislative Exchange Council is not simply a lobbying group or a front group. It is much more powerful than that.

Corporations behind ALEC’s closed doors hand state legislators the changes to the law that they desire that directly benefit their bottom line. Along with legislators, corporations have membership in ALEC. Corporations sit on all nine ALEC task forces and vote with legislators to approve “model” bills, and also fund almost all of ALEC’s operations.

Participating legislators, who are overwhelmingly conservative Republicans, bring ALEC proposals back to Missouri and other statehouses as their own ideas and important public policy innovations, without disclosing that corporations crafted and pre-voted on the bills alongside legislators in closed-door meetings at fancy resorts.

ALEC’s appeal rests largely on the fact that legislators receive trips, food and lodging that provide many part-time legislators and their families with vacations, along with the opportunity to rub shoulders with prospective donors to their political campaigns.

For a few hours of work on a task force and a couple of workshops by ALEC experts, part-time legislators can bring the whole family to ALEC’s annual convention, vote in private meetings with corporate lobbyists, stay in swank hotels and attend parties, all heavily subsidized by the corporate till.

As Barb Shelly of the Kansas City Star notes, ALEC is a driving force for regressive proposals in the Missouri General Assembly.

“There’s been no outcry from businesses begging the legislatures to clip the wings of unions. No, the pressure comes from outside groups. Republican legislators are willing to poison relationships and demean their states’ teachers, public safety workers and others in order to please their out-of-state bosses.”

ALEC provides legislators with a means to appear highly active in the legislative process while outsourcing by transferring their role in drafting legislation to corporate special interests.

“It is funded and dominated by free-market and corporate interests,” writes the Kansas City Star, “who work with like-minded legislators to push various agendas.”

And what are these various corporate agendas? Here is a taste:

ALEC works fervently to promote laws that would shield corporations from legal accountability to Missouri citizens and limit the rights of workers in the state.

ALEC is a main proponent of bills that undermine organized labor by stripping public employees of collective bargaining rights and that weaken the power of workers in the private sector through right-to-work/freedom to work (RTW/FTW) (for less) laws.

They also push “regulatory flexibility” laws that lead to massive deregulation of rules designed to protect the health of Missouri families.

ALEC is directly tied to the trend among state legislatures to limit the ability of American citizens to vote through restrictive “voter ID” laws and make it easier for corporations to participate in the political process.

Under the guise of “school choice,” ALEC pushes bills with titles like “Parental Choice Scholarship Act” and the “Education Enterprise Act” that establish or expand private school voucher programs.

At the bidding of its major donors like Peabody Energy, Exxon Mobil and Koch Industries, ALEC is a powerful force behind state-level legislation that would hinder the ability of the people to curb polluters through governmental power.

ALEC has previously said that carbon dioxide “is beneficial to plant and human life alike,” and it promotes climate change denialism.

Such bills include the “Super Majority Act,” which makes it so complicated for legislatures to change tax policy that California voters overturned the law; the “Taxpayer Bill of Rights,” which brought fiscal disaster to Colorado; and measures to eliminate capital gains and progressive income taxes.