Fought to level up those on the bottom, establish ‘maximum wage’ for those at the top

By SAM PIZZIGATI
Editor, Too Much 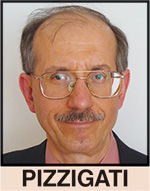 Larry Hanley, the national union leader who died unexpectedly May 7, 2019, never became much of a “household name” in the United States. His death, at just 62, received scant major media attention. But the transit worker union president lived a life that reminds us what beating back inequality truly takes.

If Hanley’s heyday had come a couple generations ago, in the middle of the 20th century, that attention would have been abundant. Back then, the end of the sort of life Larry Hanley led would have generated one admiring obituary after another.

BIG IDEAS ABOUT ECONOMIC INJUSTICE
Hanley, a big man physically, had big ideas about economic justice, just like the Labor leaders who became national heroes over the last century’s first half. Trade union giants like Sidney Hillman, the clothing workers organizer who became one of Franklin Roosevelt’s most trusted advisers, earned and deserved their acclaim. They helped forge the first nation in world history with a mass middle class.

These union leaders believed, as Hanley believed, that social decency demands struggle on two fronts. They struggled first to level up those at society’s economic bottom. They mobilized low-wage workers into unions strong enough to challenge even the most domineering employers. They staged national walkouts that won wages and benefits that gave working Americans, for the first time ever, real economic security.

And the second front? Just battling to level up the bottom, New Deal-era Labor leaders understood, would never be enough to ensure social decency. They had to level down the top as well and reduce grand private fortunes down to more democratic dimensions.

Those grand fortunes, progressive Labor activists all agreed, rested on exploitation and gave the rich the political power to continue that exploitation. A Labor Movement dedicated to the well-being of working people could not let those fortunes remain the same.

In other words, as the famed newspaper publisher Joseph Pulitzer put it earlier in the 20th century, Americans needed to fear both “predatory poverty” and “predatory plutocracy.” (Ironically, Pulitzer himself, according to historians, was anti-union.)

That meant, as Hanley admirer and former Communications Workers of America president Larry Cohen noted, “fighting to expand the benefits of mass transit and keep fares low, as much as it meant higher pay or benefits.”

CONFRONTING WEALTH AND POWER
Hanley never shrank from confronting wealth and power. At the local level in New York, he challenged the deep pockets who underwrote the political career of then-mayor Rudy Giuliani (R), who defeated David Dinkins, the city’s first African-American mayor, whom Hanley had helped elect in 1989.

At one point, Hanley brought a stagecoach to Staten Island Borough Hall to “dramatize what he described as a highway robbery” by Giuliani-allied business interests out to privatize public services.

CHANGED THE ATU INTO A PROGRESSIVE FORCE
Hanley would become a top staffer at his union’s Washington, D.C. headquarters in 2002, then be elected an Amalgamated Transit Union vice-president. In 2010, he ran an insurgent campaign against a don’t-rock-the-boat incumbent and became the ATU’s president. He brought his principles with him and “really changed” the ATU, historian Josh Freeman says, into a “progressive” force.

As ATU president and as a member of the AFL-CIO Executive Council, Hanley did his best to focus America on the two-front struggle his Labor Movement spiritual soulmates waged decades ago. He blasted moves in Congress to reward the rich and the corporations they run with incentives that would supposedly trickle down and benefit those of modest means.

“We once had a robust American working class,” Hanley thundered in the New York Times. “It was made possible in part by legislation that made workers more powerful, not charity cases. It was dismantled through deregulation, global free trade and privatization. Reverse these and strengthen Labor laws, and we can have a democracy and equality again.”

CALLING FOR A ‘MAXIMUM WAGE’
But Hanley didn’t stop there. From his ATU presidential perch, he dared endorse the most radical of Franklin Roosevelt’s moves against America’s rich and powerful.

In 2012, Hanley wrote a nationally circulated op-ed that called for a “maximum wage,” a cap on the compensation America’s top corporate executives could take home set as a multiple of what their lowest-paid workers receive.

President Roosevelt, Hanley pointed out, called for a maximum wage in 1942, at “a time of massive domestic and economic distress.” Roosevelt wanted no individual American to have, after taxes, an income over $25,000, a take-home that would equal about $400,000 in today’s dollars.

Hanley saw Roosevelt’s pitch for an income cap as “bold and brilliant.” Roosevelt “refused to be bullied by the rich,” Hanley noted, “and never lost sight of the fact that fair compensation and a thriving middle class are essential elements of a healthy economy.”
“The minimum wage certainly must be raised,” Hanley summed up in his 2012 op-ed. “It’s also time to start a national discussion about creating a maximum wage law.”

‘BETWEEN THE RICH AND THE REST OF US’
Hanley lived long enough to see that discussion begin — and translate into legislation. A half-dozen states have now had bills introduced to penalize corporations that pay their top execs over 50 or 100 times what they pay their typical employees. In Portland, Oregon, a penalty along these lines has actually become law.

In 2018, corporations with excessively paid CEOs last year paid millions in higher Portland business taxes. Many of those same firms, however, paid no federal income taxes, thanks to GOP President Donald Trump and his congressional Republican disciples.

But now, Hanley’s notion of linking CEO and worker pay is beginning to make some waves in Congress as well, thanks in no small part to robust AFL-CIO mobilizing against Corporate America’s attempt to kill the 2010 Dodd-Frank Act provision that requires publicly traded corporations to annually disclose the ratio between their CEO and median worker compensation.

The first federally mandated disclosures finally came last year. Before that, the only disclosures came through lengthy calculations the AFL-CIO undertook. Last year’s disclosures, however, revealed 31 top American execs took home over 1,000 times the pay of their most typical workers.

“You don’t have to be an economist,” Larry Hanley wrote back in 2012, “to be alarmed by the financial chasm opening up between the rich and the rest of us.”

Hanley never lost that sense of alarm. We shouldn’t either.

(A veteran Labor journalist, Sam Pizzigati co-edits Inequality.org, a project of the Institute for Policy Studies. His latest book, “The Case for a Maximum Wage,” was published last year.)